The Pain in Spain 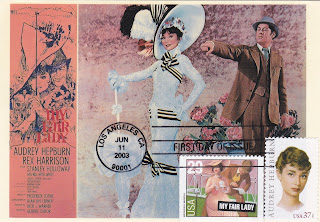 I’ll be blunt. I hate My Fair Lady (Cukor, 1964). The 60’s were a critical time of transition for the movie musical, competing with Rock ‘n’ Roll, fully abandoning original premises for Broadway blockbusters, and becoming more bloated and elephantine in the process. Lady was a sensation at the time, but it all feels so fake to me, from the phony baloney London sets, to the fact that neither lead ever actually sings, to the contrivance of the “romance” between Eliza and Henry. Shaw’s Pygmalion was always quite precarious in wielding and yielding the power dynamic between the two characters (which was effectively conveyed in the 1938 film adaptation).

But the movie musical is all over-orchestrated, with big hats and boisterousness. The light touch of George Cukor (sublime with Holiday and David Copperfield from the 30’s) is leaden here. And don’t get me started on the insufferable duel between Harrison’s sing-speak and Hepburn’s Aym-a-Good-Girl-Ayam. It’s telling that the best song, “Ascot Gavotte”, features neither lead at all. It’s a simple, funny respite in an otherwise tedious and overlong enterprise.

In fact, my two favorite things about Lady has nothing to do with this film, but with two other Cary Grant pictures. In North by Northwest (1959), Roger Thornhill says he has tickets to the theater, and then later drunkenly sings "I've grown accustomed to my bourbon", so I've always preferred to imagine he was going to see the Lerner & Loewe musical, which was in its Broadway run at the time. And then in Charade (1963, the year before Lady came out), he ushers future-Eliza Audrey Hepburn off the elevator by saying "On the Street Where You Live".

I love this postcard because the one-sheet itself so closely resembles the My Fair Lady stamp (part of a Broadway musical series, Scott #2770). Add to that the Audrey Hepburn first-day-of-issue postmark and it’s a nice little gem in my collection.
Posted by The Filmatelist at 3:12 AM

Email ThisBlogThis!Share to TwitterShare to FacebookShare to Pinterest
Labels: Legends of Hollywood, Musicals