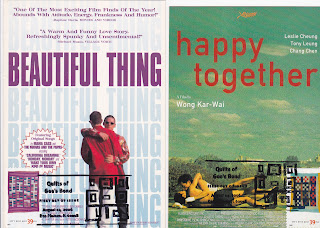 It’s hard to imagine two films as different from each other as Beautiful Thing (Macdonald, 1996) and Happy Together (Wong, 1997).  One traces the beginning of a romance while the other chronicles the slow death of one.  One is heavily stylized, with saturated colors, handheld intimacy, and grainy black & white, while the other has TV movie production values.  One story is very linear, while the other is more elliptical.  One is sexually coy, with a cast of unknowns, while the other decidedly isn’t on either count.  They take place on the other side of the globe from each other, with family and community playing a big part in one, while the other is a tale of cultural alienation, with the two main characters virtually the only ones with speaking parts.  Even the respective approach each film has to its title is polar opposite, for while Beautiful Thing is puppy-dog sincere, the men in Happy Together are anything but.

But if there’s one thing they have in common (besides their gay protagonists), it’s about how the laws of attraction can transcend all sorts of barriers and obstacles, for better and for worse.  As The Turtles song (which makes a late appearance in the Wong Kar-Wai film) goes:

Me and you and you and me
No matter how they toss the dice, it has to be
The only one for me is you, and you for me

And these lyrics hold true, in different ways, for both films.

Beautiful Thing starts off as a British working class drama in the classic kitchen sink tradition.  Gritty, urban, and racially diverse, we eventually learn that this, external trappings aside, is no world of a Loach or Leigh or Richardson.  For while the film starts with its feet on the ground, it ends with its head in the clouds.  Forged from common feelings of loneliness, the chemistry between Jamie and his mate Ste is sweet, tentative, believable.  But while trenchant topics like schoolyard bullying and domestic abuse start front and center, the film, perhaps a little too easily, sheds itself of these issues to lose itself, head over heels, in its romance.

What would be the cultural fallout to two lads being out and proud in such a closeknit but economically disadvantaged environment?  There would be pockets of acceptance, but the film skirts the larger backlash from peers that would likely result.  Is the film itself a metaphor for how those other problems dissolve away in the mind’s eye (but not the real world) when you fall in love?  Or is it a victim of its own soft center and good intentions?  The rooftop finale ends up being extremely touching but also a bit naïve, but perhaps that’s only if we project our expectations on the film to ground itself in fact.  But Love often represents its own Truth that ignores fact.  That’s where the risk of Love lies, and one’s sense of the larger film as emotionally authentic fantasy or well-meaning empowerment exercise directly relates to how, for this couple, you choose to embrace this Truth.

That this kind of Love-as-Truth can fly in the face of all demonstrable evidence is also at the core of Happy Together, a film that finds in the extraordinary visual palette of cinematographer Christopher Doyle, a corrosive melancholy in the depiction of a relationship in its downward spiral.  For there is love there, but buried under the frustration, imbalance, and resentment of a romance on the rails.  There are lots of petty arguments and needling efforts to taunt and torture the other, but no huge turning point in the course of the couple, just a festering complacency that is spiritually toxic.  A slow death by a thousand ruts.

But that doesn’t mean there isn’t beauty, intimacy, and longing—even if it’s longing for something that once was but is no longer.  The fulfillment of a personal dream, only to understand its hollowness when that person to share it with is absent.  The memory of a closeness that’s faded, when it’s mirrored in the kindness of a stranger.  The cherry-picking of experiences, the fixation on little moments that echo in your consciousness that serve as a reminder of why you’re drawn to them in the first place.  The heart wants what it wants, even if it doesn’t always know best.  Like moths to that flame until one inevitably burns out, director Wong captures those feelings that go beyond narrow conceptions of sex and gender.  It’s a film that’s erotic not in the particulars of the bodily exchanges, but in the language of cinema itself—the rhythms and music, the cutting and compositions that infuse every frame with sensuality…and sadness.

Tony Leung and Leslie Cheung were as big as any actors alive in Chinese cinema at the time, but their portrayal of two gay lovers has no real equivalence in American cinema when it comes to stars of that magnitude in our industry.  And a film like this makes you wonder what a Scorsese or Eastwood or Spike Lee would do with similar material, where the queer element is both central and incidental.  Maybe one day we’ll know.

Like the previous Quilts of Gee’sBend posting, these two one-sheets were selected because the patterns and color schemes of the poster design matched nicely with the stamps themselves (Scott # 4094 & 4091).

For more entries in the Queer Film Blogathon
Posted by The Filmatelist at 7:21 AM 1 comment: