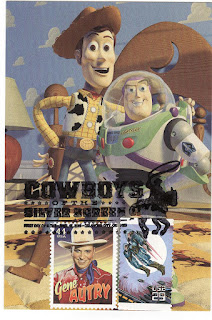 Toy Story 3 is a triumph.

I, for one, had my reservations.  While I feel the original is about as good as animated films get, I’m one of those people out there who didn’t actually care for the second film very much.  Pixar has prided itself as a brand known for original thinking, but Toy Story 2 seemed larded with the easy type of meta-humor (Star Wars reference? Check; Star Trek reference? Check; etc.) which dates quickly and pulls me out of the film.  The movie has one show-stopper—the heartbreaking “When She Loved Me” flashback song—and plenty of funny energy, but the pervasive resorting to topical gags seemed more in the spirit of Family Guy (and that is not a compliment).

But Toy Story 3 plumbs emotional depths I wasn’t expecting, especially exploring the darker recesses of rejection, resentment, and petty tyrannies that resonate far beyond the playground politics of childhood.  Plus, the film has the courage of its convictions, taking us to the brink of a truly apocalyptic ending that is both terrifying and profoundly moving, while also providing us with one of the best deus ex machinas in recent memory, earning its stripes and never, ever feeling like a cheat.

But the one thing to which I’ve never been able to relate in these films is the emotional attachment Andy has to his toys.  They are not only springboards for his imagination; they are also his Friends, virtual proxies for a social life.  We see through the series the extent to which he personalizes that connection, having his toys as constant companions in his childhood, and caring about their fate practically into adulthood.

I guess that’s what I don’t get.  My toys were just my toys.  They weren’t confidantes, or buddies, or security blankets.  I didn’t invest them with larger personalities, didn’t attach emotional significance to them.  Did anyone?  I honestly don’t know.  I didn’t have a bad childhood by a long shot, but I did have a fairly isolated one.  I didn’t have many friends, rarely went to other people’s houses or got invited places, so I honestly don’t have a frame of reference on what other kids or families did.  My Dad was loving but logical.  An engineer, so empirical.  I never believed in Santa, never had a fantasy life indulged or a creative streak nurtured.

When my mom moved up to the Bay Area, selling the house we grew up in and Dad died in, she had an estate sale, which included all the stuff in my room, from my childhood.  Walking down memory lane that one last time, poring through artifacts, was fascinating but rarely sentimental.  Growing up, for me, was about ostracization, frustrated opportunities, and a singular awareness of how alone I was in the world.

That’s why movies that are fueled by nostalgia, like Stand By Me or American Graffiti, do very little for me.  Because when it comes to that period of my life, I never look back with fondness or warmth.  It was just passing time until my Life could really start.  And maybe, in that sense, I’m not unusual either.  I just don’t know.

So for me, the first Toy Story (Lasseter, 1995) remains the best, because it doesn’t obsess about that relationship the way the other two films do.  That film is about self-actualization, coming to terms with who or what you are, on your own and in the community to which you’re tied.  It’s that sense of community that carries through all three films and serves as the vital backbone to the series (helped by a marvelous cast).

As for the estate sale, I did sort through all my toys.  I don’t have any children (and likely never will), but I have two nephews, and I passed on a number of my old toys to them—not because I felt the toys deserved to be played with, but because I thought Josh and Caleb might get a lot of mileage out of them.  That’s the relationship I understand. 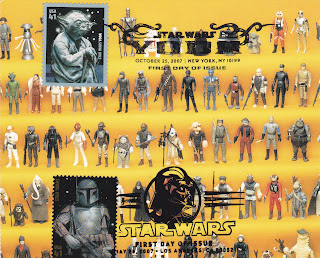 OK, maybe a few of the Star Wars action figures I kept.  As collectibles, you know.

Gene Autry (Scott # 4449)was part of the Cowboys of the Silver Screen series, while the flying spacemen (Scott # 2473) was part of a science fiction issue.  Yoda (Scott # 4205) was its own release, separate from the Star Wars issue earlier the same year, which included Boba Fett (Scott # 4143j)

Posted by The Filmatelist at 5:55 PM No comments: 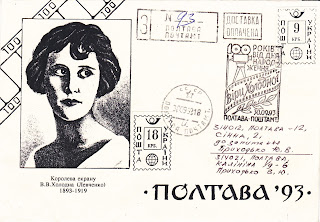 I don’t read Russian but the dates suggest that this is commemorating Vera Kholodnaya (1893-1919), whose film work predates the better known silent cinema sparked by the Revolution starting in the early 1920's. I've never seen any of her pictures, but she was a stage actress who had some crossover success in films before her death.

But I got this envelope because of the very neat postmark with the motion picture camera and the length of film, a pretty unusual illustration to run across. I'm assuming this is commemorating the centenary of cinema, though the date illustrated here (1893) is a little earlier than most citations. 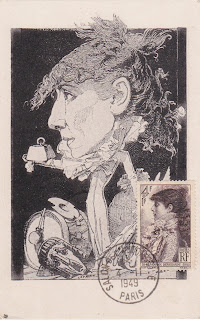 Sarah Bernhardt was probably the most famous actress in the world at the turn-of-the-century, and she had a few celebrated motion pictures, too--mostly recreations of her stage successes. This French stamp was issued in 1945 (Scott #B191) and nicely complements the illustration of Bernhardt on the card. The postmark is from 1949 so isn't a First-Day-of-Issue, but a regular postmark. Both items were choice finds at Westpex.
Posted by The Filmatelist at 5:04 PM No comments: