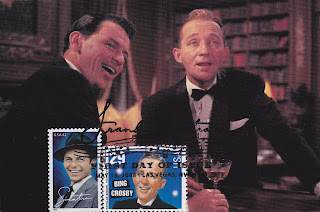 Although we're constantly overrun with inferior remakes these days, it's not a new phenomenon. This still has Frank Sinatra (Scott #4265) and Bing Crosby (Scott #2850) serenade each other in High Society (Walters, 1956), a musical revisitation of the superior The Philadelphia Story. While the original Cukor film is spritzy, it still has emotional weight. But High is just that: light as a feather, cute and charming but of no real consequence, with zero sexual chemistry and musical numbers, despite the involvement of such heavy-hitters, that evaporate as soon as you've heard them. 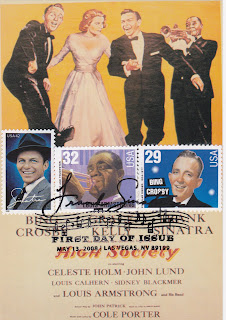 I’ve included the one sheet, which also has the stamps for Grace Kelly (Scott #2749); Cole Porter (Scott #2550),who wrote the entire score; and the Rhode Island stamp (Scott #3599) from the Greetings from America series, complete with sailboat, one of which is prominently featured in the film. Paired up with the Porter stamp is the Music stamp (Scott #3772d) from the American Filmmaking series, complete with Oscar silhouette on the postmark (Porter was nominated for his song “True Love”, which was also the name of the sailboat in the film). 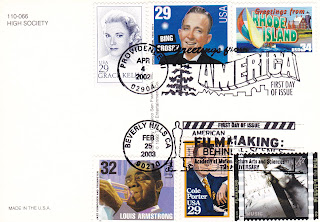 You’ll also notice that the two Louis Armstrong stamps are slightly different from each other, with the lettering alternating between white and black (the difference being that one was sold individually, while the other was sold as part of a strip with other jazz legends). The Scott #’s are 2982 and 2984 respectively.
Posted by The Filmatelist at 8:57 PM No comments: