I just received back from the USPS one of my Vertigo postcards with a new FDC, so I thought I’d post it because it’s unique for a couple of reasons. I’ve already discussed my great love for the film, and while the one-sheet is the same as the previous post, the cancellations and stamp combinations are different. 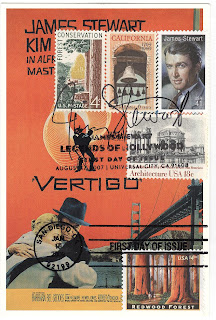 First of all, this postcard has six different First-Day-of-Issue postmarks on a single card, as many as exist in my collection (in chronological order):

You can see by the dates that this spans 12 years from the first postmark to this most recent one.

This card also has the most stamps of any non-Disney postcard I have, for in addition to those listed, I also used four other stamps. The Golden Gate Bridge and Palace of Fine Arts stamps were featured in the previous Vertigo blog post, to which I’ve added the two oldest stamps on the postcard: Forest Conservation (1959; Scott #1122) and the bicentennial of the California settlement (1969; Scott #1373) 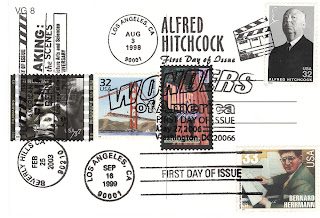 I used so many of the redwood tree stamps because of the visit Scottie and “Madeline” make to the redwood groves in the film. As big a movie buff as I am, I never quote movies in my everyday life, but if I’m ever in a museum or national park and encounter a large tree cross-section, I will always say, “Here I was born, and there I died. It was only a moment for you. You took no notice”. It’s a haunting moment in a haunting film.

As for the California stamp, nothing could be more perfect for the film than its depiction of a mission belltower, which, sadly, doesn’t really exist if you visit San Juan Bautista in real life. The mission is there but the tower in the film is a matte painting.

The dollar value of all the stamps is also by far the most of any in my collection, because this most recent postmark was for a priority mail stamp, putting the total face value of the card at $7.37.

I think this card is also ready for retirement. There’s very little real estate left to fit any other stamps, and I’m hard-pressed to think of anyone else associated with the production who will be recognized by the Postal Service. The film features Kim Novak’s best performance (Stewart’s too, incidentally), but I don’t see her ever getting a stamp. The brilliant Herrmann thankfully has already been acknowledged, and while Saul Bass (title credits), Robert Burks (cinematography) and George Tomasini (editing) also make invaluable contributions to this masterpiece, it seems likely that this will be about it--unless the film itself gets its own stamp one day. Who knows?

But I’m really happy how this one turned out—a real prize in my collection commemorating an even more special movie.

Posted by The Filmatelist at 11:23 AM No comments: