In the spirit of the season, here's a one-sheet with Mickey & Minnie and their corresponding stamp from the Disney Art of Romance series. Ye Olden Days (Gillett, 1933) is a charming little short, unusual in that it pits prince Goofy as minstrel Mickey's romantic rival for princess Minnie's affections. A comical jousting duel is the inevitable climax. Whomever you adore and hold dear, many blessings to you today and far beyond, for Love is precious and worth celebrating always.
Posted by The Filmatelist at 11:43 AM No comments:

What Dreams May Come

In this Delicatessen (Jeunet/Caro, 1991) one-sheet, we find another example of a foreign film whose poster imagery on the one-sheet inspired me to create a FDC--or in this particular case, three. Miss Piggy (Scott #3944d) is part of the Muppets 2005 release, while Wilbur from Charlotte’s Web (Scott #3988) was part of a children’s storybook issue a year later. The first stamp represents the Year of the Boar (Scott #3895k) in the Chinese Calendar USPS release, and all the postmarks are clear and distinct without obscuring the artistry of the poster itself. 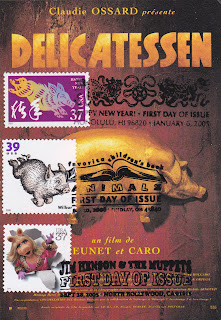 Laying claim to his own special territory in French cinema, Jean-Pierre Jeunet (who often collaborated with co-director Marc Caro) is responsible for films that are tricky to assess, and Delicatessen, their first feature, typifies much of what I find frustrating in his work. The personalities are often built on mannerisms and physical distinctiveness without ever delving into true characterization. The hyper-active editing and extreme stylization in photography and set design rarely contribute to any larger thematic intent, making the end result appear self-consciously showboaty. And all these layers of bells and whistles prevent it from having a larger emotional payoff, insulating it from greater feeling by being such a slave to design. An assault on the senses, the film is an exercise in exhaustion, which most of his films are guilty of to one degree or another.

Only...the attention to detail, rhythm, composition, causality can be so intricate, so meticulous, that there remains something resolutely visionary and unique in his films--with some persuasive throughlines of feeling often at risk of getting lost in the din. For all its quirky kineticism and whimsy that's borderline-overbearing, Amelie is grounded in a very real melancholy. A Very Long Engagement has a dull main love story, but remains stark and visceral about its World War I setting and details without ever wallowing into the pathos of, say, Spielberg’s recent War Horse. Micmacs dissolves into silliness, but it’s still a sweet paean to the familial and forgotten.

Vital to his films post-Delicatessen is Jeunet’s generous and expansive view of the world, with the smallest of actions having the most profound of consequences, for good and ill. The way we are all connected, tied together by invisible threads that quiver with each choice or action, is something he loves to literalize through Rube Goldbergian sequences of cause-and-effect. But these are no mere contrivances, for Life, he shows, is one long series of happy (and unhappy) accidents—-filled with love and loss, layered with optimism but leavened with acceptance. Redemption is possible, and happiness need not be elusive, through an alchemic combination of patience, rigor, and blind luck. While sometimes the visual cacophony threatens to overwhelm his pictures, these sentiments still are often captured in miniature, with small throwaway gags adding richness and texture when it feels like the larger arc is treading water. A symphony of small grace notes, if you will.

Essentially, perhaps even ironically, it is his most fantastical that’s also the most emotionally resonant, for The City of Lost Children (1995) is a masterpiece, and one of my favorite films from the past 20 years. It is a tragedy and an adventure, an unconventional love story and a futuristic horror flick—all beautifully balanced while still staying decidedly off-center. But most of all, it’s about dreams, and how they are critical for living. Dreams keep us young. Keep us sane. And while pursuit, ambition are what we focus on and work for consciously, we cannot control our dreams. But we are still servants to them. They may ground us, inspire us, comfort us. They may be follies, impractical, unobtainable. But they still remain in our lifeblood. 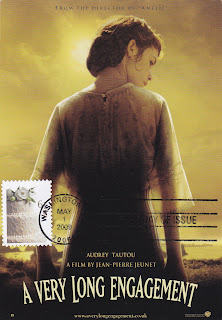 Ultimately, City is about dreams, but is also its own dreamscape, actualized. And in it is terror, longing, and relentless hope. Just like each of our Futures. For what lies before us is equally unknowable—full of promise and wonder, hurt and very scary possibilities. The ending of the film is the most opaque of all of Jeunet’s works, which for me makes it the most satisfying. There are no easy answers or resolutions, and there’s much that haunts you afterwards. But it’s a triumph of the imagination like few recent films I know, and a reminder of the power that even a single, small teardrop can have on the world.
Posted by The Filmatelist at 6:24 AM No comments: