One of my most favorite people in the world—in my lifetime, in fact—is getting married today. And to the lucky couple, I wish nothing but good health and happiness, bliss and adventure, joy and security for the rest of their lives. It is a beautiful thing, this union, and a special, sacred day. One worth celebrating. 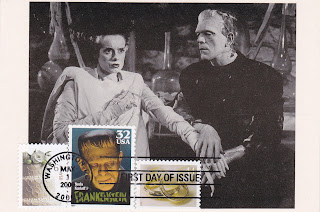 Bride of Frankenstein (Whale, 1935) is one of my favorite films. It has rich humor and genuine pathos. It has fantastic production values and a magnificent score (by Franz Waxman). It has tremendous acting and memorable, iconic setpieces. It has its own sly streak of perversity and boundless quantities of creativity and inspiration. And while never really scary, it has plenty of creepy and tension-filled moments, too. It is a cinematic marvel and joy.

But it is also a meditation on connection, and on the almost primal impulse to find a mate, a match, a kindred spirit. Things don’t quite work out in the end for the couple pictured here. But the film delves deep into the idea that finding someone else to pair up with is a defining trait of the human condition. The Monster (tenderly played by Boris Karloff) knows that. In a world of estrangement, he simply seeks to belong, to be accepted for what he is, even if it’s just by one other in the whole world. And it is this yearning that makes him the most relatable and sympathetic figure in the film, far more so than any of the “real” people.

Of course, the most memorable scene is between our “hero” and the blind man he encounters, isolated in his cottage in the woods. Oblivious to the monster’s appearance, he embraces him as a visitor and takes him into his home—the first sign of any kindness the creature has ever experienced and a simple, selfless act, free of judgment, which resonates with him (and us) for the rest of the movie.

And so it is sometimes—two lonely people who meet only for a moment, but who greatly impact each other’s life. A different kind of bond, but one with its own value and legacy. And so on this wonderful day, my thoughts and prayers go to those who found that special someone—for a moment or a lifetime. Each of those encounters is a blessing beyond measure. 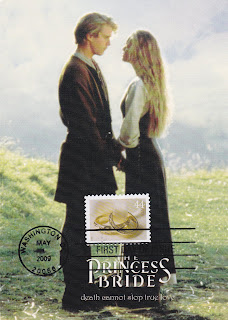 Posted by The Filmatelist at 11:14 AM No comments:

Email ThisBlogThis!Share to TwitterShare to FacebookShare to Pinterest
Labels: Love/Romance 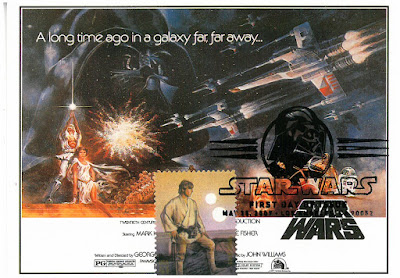 So much has happened since then, it feels like a different life almost, but it's been a year since I left my job at Lucasfilm (something I only obliquely referenced in the past on this blog).  I'm sure I'll periodically post more about my experience there in the future, but this post serves as a tribute to over a decade commuting to Skywalker Ranch in Marin County.  Below are postcards you can buy on the property (which has a gift store).

The top building is the Main House, where pre- and post-production occur.  It's a beautiful facility, particularly the research library which supports productions across a myriad of studios, in both film and television. 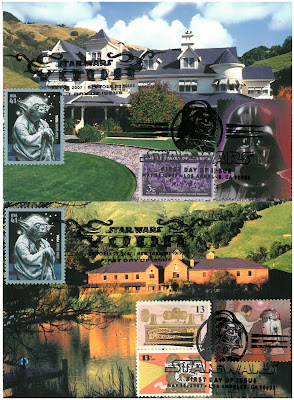 The bottom postcard is known as the Tech Building and is home to Skywalker Sound, including a variety of recording and mixing stages and a wonderful theater.  When I joined the company, Skywalker Ranch was overflowing with employees and the expansion to other complexes, including eventually the Letterman Digital Arts Center (LDAC) in the Presidio in San Francisco, all occurred during my time there (though my office never left the Ranch).  The Yoda statue is on the Presidio grounds and visible to the general public. 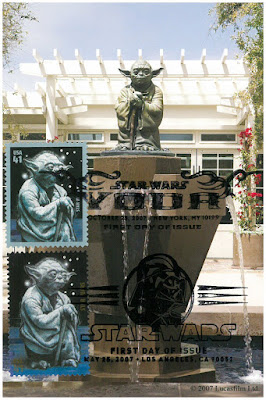 I came on between the releases of Episode I and II, and my job often meant a deep immersion into the history of the studio and the Star Wars productions in particular (though certainly not limited to that).  So the release of the Star Wars stamps by the USPS also occurred during my time there.  Below is just a small selection of the many hundreds of First-Day-of-Issue postmarks on postcards I have that are Star Wars related.  Maybe one day I'll see fit to part with a handful (I have quite a few duplicates) but for now, here's a sample that evoke different things about my memorable time working there. 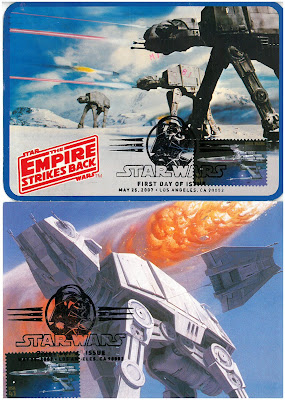 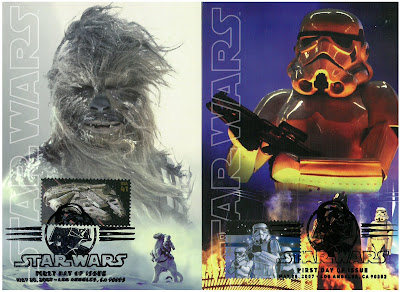 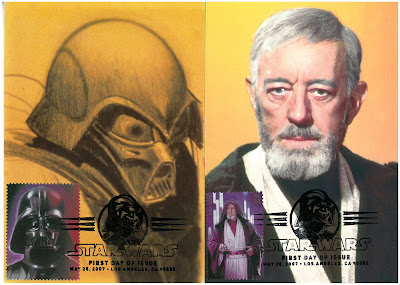 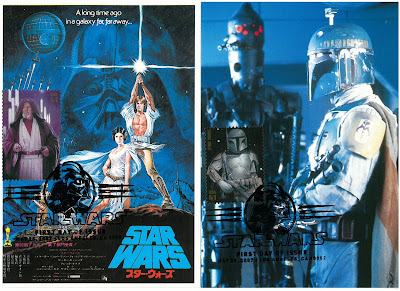 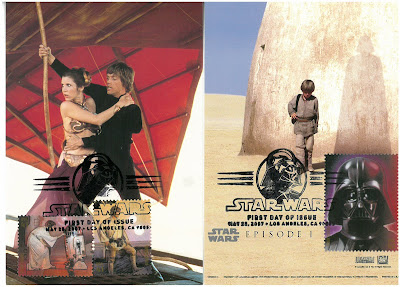 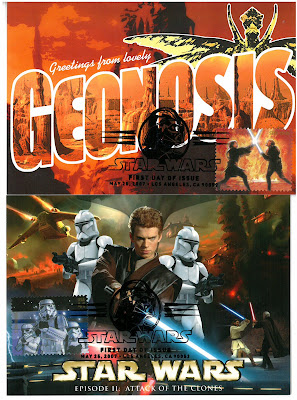 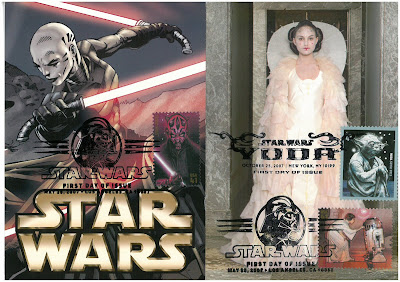 The stamp joined with Vader on the Main House card is the oldest movie stamp ever, Scott #926.  The two stamps other stamps on the Tech building card are the centennial of sound recording and the 50th anniversary of talking motion pictures (Scott #1705 & 1727 respectively).  The latter was actually released in 1977 (50 years after The Jazz Singer), which was also the year the original Star Wars rocked the world.

Posted by The Filmatelist at 7:19 AM No comments: