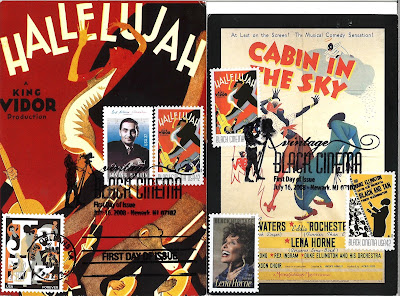 Of all the MGM musicals ever made, spanning over half-a-century, only 2 have been memorialized on a US postage stamp.  One is, unsurprisingly, The Wizard of Oz, which I have discussed on this blog before.  The other?  Not any of the usual suspects, like Singin’ in the Rain or The Band Wagon or Meet Me in St. Louis.  The only other film is King Vidor’s Hallelujah (1929).

That was part of a 5-item postal issue on early Black Cinema (also discussed in an earlier post) and Hallelujah is easily the most famous of the 5, and a seminal work in the genre because even with sound in the movies less than 2 years old, you can see Vidor pushing the aesthetic envelope.  There’s certainly a lot to dissect about the film, from its ground-breaking origins (it was one of the first Hollywood studio films with an all-black cast) to its troubled legacy because of the narrative it helped fuel about African-American stereotypes.

But something that makes this film stand out among musicals is also something it has in common with another all-black MGM musical 14 years later, Vincente Minnelli’s Cabin in the Sky (1943).  And that’s the unique role that religion plays in both films.  For integral to both films’ messages is the ways church and God, music and ritual are hard-wired into black culture. 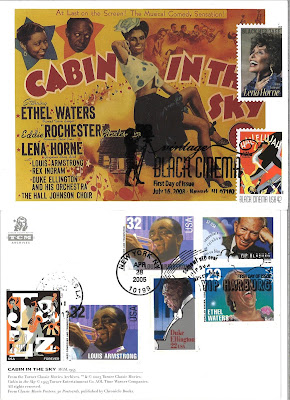 Hallelujah is about a sharecropping family whose eldest son Ezekiel (Daniel L. Haynes) gets lured into assorted temptations (gambling, women) and it’s his religious rise as a rabble-rousing pastor and eventual fall from grace, a victim of his vices, that comprise the backbone of the film.  Throughout, we see that singing—in the cotton fields, with neighbors, in church and nightclubs—is an important part of the family’s life.  Musicals have often been criticized for being “unrealistic” in having their characters spontaneously burst out in song, but in Hallelujah, it feels completely normal because song and community are intimately entwined.  Music brings people together, providing inspiration and comfort in a hard-scrabble life and so all the music numbers have an almost naturalistic feel—both the traditional spirituals but also the ones written for the film (most notably “Waiting at the End of the Road”, by Irving Berlin).

Cabin in the Sky is actually pretty similar in that Joe (Eddie “Rochester” Anderson) has his soul fought over by competing angels and demons as he is also tempted by gambling and women and faces a troubled path toward redemption that isn’t without its own pitfalls and distractions.  While Hallelujah is presented as melodrama and cautionary tale, Cabin is played for laughs and uplift, but it also has musical numbers that take place in the wide array of African-American centers of community: church, juke joints, backyards and work gangs.  Here, the musical heavy lifting is done by the marvelous Ethel Waters, who sings the title tune as well as the Oscar-nominated “Happiness Is a Thing Called Joe” (by Harold Arlen and E.Y. “Yip” Harburg).  But she gets tons of great support by Lena Horne and cameos from Louis Armstrong (as a demon) and Duke Ellington. 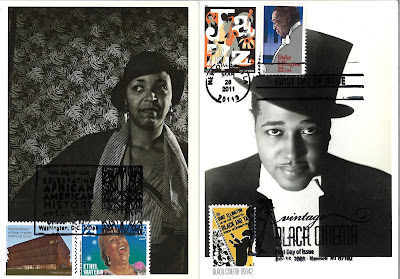 But it’s interesting that when you look at the films, the churches act as spiritual centers and this is in sharp contrast to decades of mainstream Hollywood musicals that rarely use churches as much more than narrative devices.  Ezekiel whips his camp meeting congregation into a religious fervor, and while his personal story is one of backsliding and hypocrisy, the message of love and confession is one that touches a nerve in his flock (and which is upheld without irony by the rest of his revivalist family).  Joe’s afterlife in eternity is genuinely at stake and fidelity and responsibility are depicted as paths toward a better marriage and better living.  The square Rev. Green (Kenneth Spencer) may not be nearly as fun as Rex Ingram’s hilarious Lucifer, Jr., but he has Joe’s best interests at heart—not just to follow a set of prescribed rules but to improve Joe’s relationship with the devoted Petunia (Waters).

I’m hard pressed to think of many examples of the great canon of American musicals pre-1970 that touch on central religious themes that way.  Sure, churches are abundant for social gatherings or weddings (“What a Lovely Day for a Wedding” from Royal Wedding or “Get Me to the Church on Time” from My Fair Lady).  Bible stories are alluded to in song lyrics, from Seven Brides for Seven Brothers’ “Sobbin’ Women” to Elvis singing “Hard Headed Woman” in King Creole.  But they’re little more than plot points, without any larger thematic resonance.  Heck, even Bing Crosby as a priest in Going My Way is rarely a fount of theological insight but rather a source of warm, friendly, homespun advice.  Ditto the nuns in The Sound of Music.

Which make Cabin and Hallelujah interesting to me, since they aren’t afraid to immerse themselves in the middle of a part of the American social fabric that most musicals are reluctant to touch.  Those other films may implicitly embrace what some might consider religious “values”, but Hallelujah explores the complex relationship between faith and character, and Cabin finds joy in spaces that can be both reverent and rambunctious.  Once the 70s kick in, we see stage adaptations like Fiddler on the Roof or Jesus Christ Superstar that more explicitly examine (and question) beliefs and traditions, but these early MGM musicals not only paved the way in bringing African-American casts and culture front-and-center to white audiences, but its worship sensibility, too. 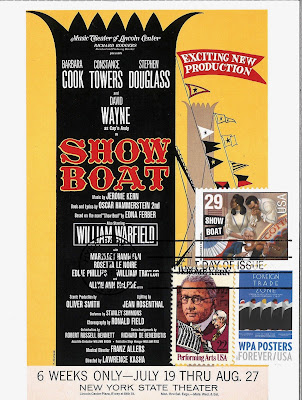 Now, I did mention that only 2 MGM musicals have been depicted on a USPS stamp, but I should make a technical concession to Show Boat (1951, Sidney) for while the film itself is not on a stamp, the original Broadway musical is.

Hallelujah was released in time for the 2nd annual Academy Awards, and it was King Vidor’s second Best Director nomination.  He would earn five in his career—a record number in that category for someone who would never earn a competitive one.  He did receive an Honorary Oscar in 1978.  His nomination for Hallelujah is unusual in that the director nomination was the only one the film received.  This has only happened a handful of other times since: The Inn of the Sixth Happiness, Alice’s Restaurant, Blue Velvet, The Last Temptation of Christ, Short Cuts and Mulholland Dr. 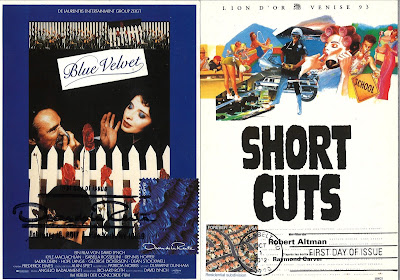 Cabin was Minnelli's first feature film, and he would go on to helm two Best Picture winners that were MGM musicals: An American in Paris and Gigi, the latter earning him a Best Director statue, too.