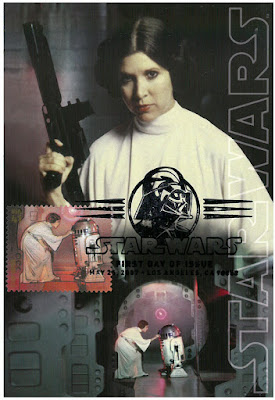 In what now seems a lifetime ago, I once had to go through tens of thousands of feet of 16mm behind-the-scenes footage from the original Star Wars trilogy.  Most of this was not shot on the set, but rather with the effects crew, model and creature shops, and other artists commonly known as “below the line” but critical to any movie’s success, especially those.  So you rarely saw much of the cast, but one memorable sequence was Carrie Fisher in her (in)famous slave bikini outfit from Return of the Jedi (1983, Marquand) sunbathing in the Arizona desert during a break, side by side with her similarly costumed stunt double.  And it was a jarring moment because you actually saw her interacting with another woman. 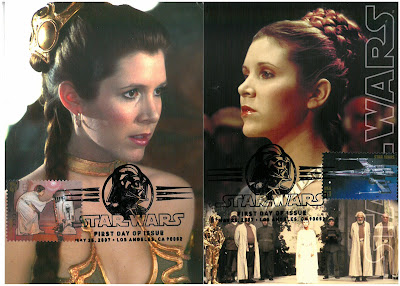 For let’s face it—the original three films are a sausage fest and Bechdel test nightmare.  There are only 3 female speaking parts in the whole trilogy—the short-lived Aunt Beru, the blink-and-you-miss her Mon Mothma (recently revived in the terrific Rogue One), and Princess Leia Organa.  So Carrie had to do the heavy-lifting for all 3 films when it came to female characterization, since she was both love interest and leader of the Rebellion.  Powerful, commanding, willing to stand toe-to-toe with anyone she came up against (Vader, Tarkin, Jabba) but also kind, caring, and authentic.  One of the highlights of Star Wars: The Force Awakens was seeing her back in action, still filled with authority and compassion.  The fact that the last two franchise films have had women at the center of the heroics is due in large part to her influence. 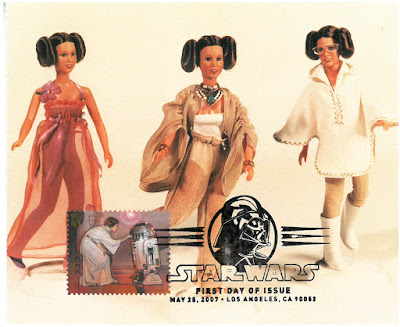 Of course, since then she has also proven herself a witty writer and raconteur, smart aleck and cinematic sidekick, member of a vibrant-but-troubled Hollywood dynasty, an object lesson about addiction and an ambassador for destigmatizing mental health issues.  And she leaves us just a few months after her co-star Kenny Baker (who played R2-D2) and, tragically, one day before her mother Debbie Reynolds. 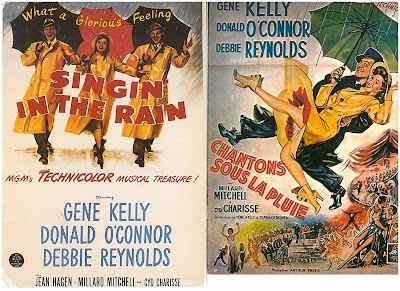 Just a month ago, I saw a sneak preview of Bright Lights (2016, Bloom/Stevens), a documentary about Carrie & Debbie.  It's a marvelous film in how it shows the once tumultuous mother-daughter relationship that evolved into one of deep love and support, but leavened with an enormous amount of playful ribbing, snark, and self-deprecation.  They had come to terms with the demons of the past and were both continuing to dive into creative pursuits fueled by wisdom and nostalgia.  So much of their personal bad luck and bad choices were scandal sheet fodder for so long, that there was little choice but to face the future with bravado and pluck.  The film follows each of them individually (Debbie rehearsing a one-woman show, Carrie attending a scifi convention), but the best parts are when they are together.  They come off as best of friends and savvy partners in crime, and it really did seem hard to imagine how one could exist without the other.  Both full of such indomitable spirit in the film, and both gone much too soon (Carrie at 60, Debbie at 84).
Another wonderful thing the film highlights is Debbie’s tireless campaign to save the artifacts of Hollywood history, particularly the costumes—not just of her films, but of films that predate her and that would have otherwise been thrown out by studio departments who were, back then, far less interested in preserving their past than making space for the latest productions.  Pieces that she purportedly saved over the years (through fundraising and her own backlot connections and initiative) include Charlie Chaplin’s bowler, Elizabeth Taylor’s Cleopatra headdress, Marilyn Monroe’s subway grate dress from The Seven Year Itch, and Judy Garland’s Oz ruby slippers. 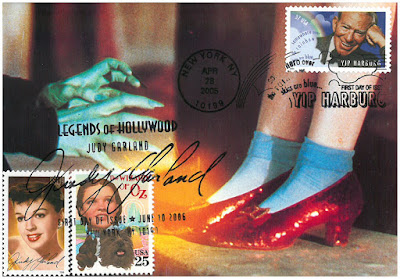 One of my favorite songs is “Graceland” by Paul Simon, who was once married to Carrie, and whose relationship with her is documented in that song (among many others).  It’s a song about renewal and second chances, and when I drove across country last year, I listened to the whole Graceland album as I approached Memphis to visit Elvis’s legendary estate of the same name.  In the song, Simon writes about his ex:
She comes back to tell me she's goneAs if I didn't know thatAs if I didn't know my own bedAs if I'd never noticedThe way she brushed her hair from her foreheadAnd she said losing loveIs like a window in your heartEverybody sees you're blown apartEverybody sees the wind blow 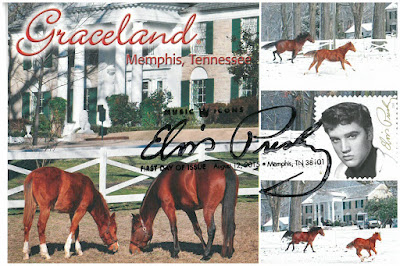 Life is a pilgrimage and we should all be so lucky as to have it filled with grace (in both the poetic and spiritual dimension).  Yoda says to Luke, “Luminous beings are we, not this crude matter.”  2016 was a rough year for a lot of people for a lot of reasons.  May the road we take in 2017, portentous clouds notwithstanding, be filled with the light, courage, good humor and fierce resolve that they both embodied so well. 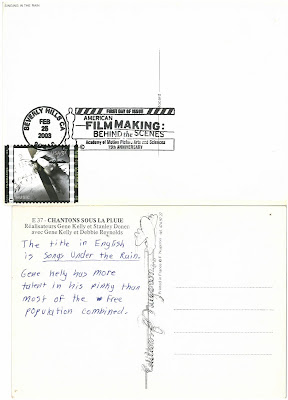 Carrie and Kenny share a USPS stamp, essentially, from the Star Wars issue back in 2007.  That is Scott #4143f .  The X-wing fighter is #4143m.  The Wizard of Oz stamp is #2445, Judy Garland #4077, and Yip Harbug #3905.  The music stamp from the American Filmmaking series is #3772d.  And Elvis is #5009.  Incidentally, the first film poster on a postcard I ever owned was a gift from my high school girlfriend.  It was for Singin’ in the Rain, still one of my favorite films ever.  I’ve included it here, along with the inscription she wrote on the back, since this whole blog & collection originated, in a sense, with her. 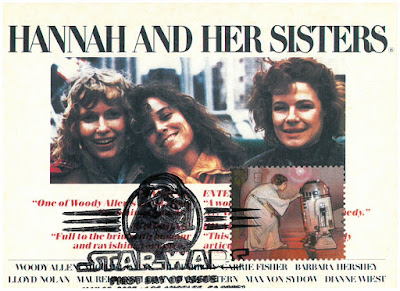 Posted by The Filmatelist at 10:18 AM No comments: