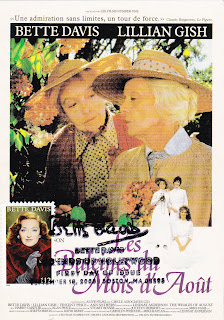 This is the first in a series, exploring cinematic subjects who have not yet received a stamp but seem overdue.

Lillian Gish was as big a female silent film star as existed, and while the Stars of the Silent Screen issue found space for the likes of the completely worthy Clara Bow and Zasu Pitts, Gish was MIA. It’s often hard to account for these absences other than that the estates of the deceased are very protective of their images and haven’t yet given the USPS permission to use them for a postal issue.

I haven’t seen The Whales of August (Anderson, 1987), but it was Gish’s last film and on my (incredibly long) To See list. But I have seen Maine. The best road vacation I probably ever had was my wife and I driving from Boston, through Vermont, across New Hampshire, B&B’ing all the way. This was years ago, in October when the foliage was in full bloom. It was a gorgeous drive and I remember driving along, never turning on the radio, just absorbing the sheer beauty around every turn. Because of the tree cover, you couldn’t even see any signs of civilization on the highway so it was just trees and mountains and vistas. Amazing.

But perhaps the best part was when we drive across Maine and hit the coast. We fell in love with it instantly, the entire stretch north of Portland (before you hit all the old money estates), and swore that if we ever got tired of the Bay Area and chose to retire in a small cabin with some cats, that we would do so in Maine. One of my favorite documentaries of all time is Frederick Wiseman’s four-hour Belfast, Maine (1999) which is epic in length but thrives on the intimacy of examining daily life in this small town, in all its variety of cultural, industrial, and personal settings. It’s an absolutely exquisite film. 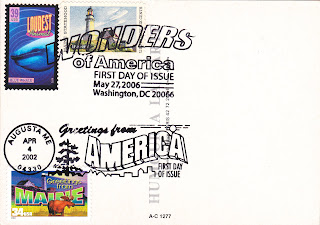 When Gish finally does get her stamp, she’ll join Bette on the front here. In the meantime, The Blue Whale (Scott #4069) from the Wonders of America series was an excuse to also include the 1970 Maine statehood stamp (Scott #1391), while a separate Maine stamp (Scott #3579) from the Greetings from America series also features a lighthouse (they’re everywhere in Maine and great fun to visit).
Posted by The Filmatelist at 5:32 PM No comments: