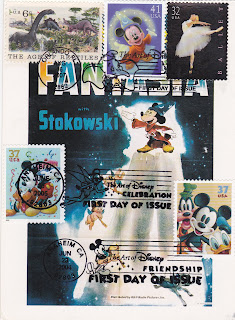 Fantasia celebrates its 70th anniversary this year and still remains a hot mess of a movie. Back in 1940, there was no “animation”; there were just cartoons, so as a testament to Walt Disney’s ambition in merging cartoons with high culture, it still gets plenty of appreciation in this corner. And some of the pieces remain quite striking, particularly Mussorgsky’s “Night on Bald Mountain” and Ponchielli’s deadpan ballet parody “Dance of the Hours”. This latter piece shows that Walt didn’t take the enterprise too seriously—that he could create images that were playful as well as nightmarish, with Mickey's Dukas number being an effective hybrid of both.

But the rest is a mixed bag. “Ave Maria” is lovely and reverent, but changes the original Schubert to the point of distraction. "The Nutcracker" is fun but slight, while the exercise in abstraction for the Bach remains rudimentary. And the bad remains bad, with the garishness of Beethoven’s "Pastorale" sequence trivializing the epic beauty of the symphony itself.

Probably the most daring piece is the most recent classical selection, too: "The Rite of Spring". This is the most interpretive of the pieces, taking the chaotic vigor of the Stravinsky and translating it to prehistoric times. It’s an inspired choice, and while it necessarily neuters the raw sexuality implicit in the number, it still works great as drama and animation. However, the primeval world only reminds me of an ever more audacious dinosaur dance—"Bolero" in Allegro non Troppo (Bozzetto, 1976), a largely farcical Italian spoof of Fantasia using the same conceit of an animated orchestral program. But while Disney's dinosaurs are faithful to a certain realism, Bozzetto’s version is a highly stylized fable, showing how an alien coke bottle ignites the spark of Life that, like the Ravel, builds and builds and builds into a grand march of evolution and survival of the fittest that is clever, funny, and haunting all at once. I’d easily take it over Fantasia in its entirety. 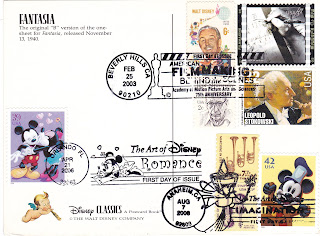 We’ve seen the 5 Mickey releases before (including a "Sorcerer's Apprentice" stamp itself) with the matching First Day of Issue postmarks. And the American Filmmaking series should be very familiar by now, too (Fantasia did indeed win 2 special Academy Awards at the time). The challenge was to find as many related stamps as possible and incorporate them into the body of the card. In chronological order, the seven additional stamps listed are

With 6 separate postmarks (all in sequential years) and 13 stamps total, this remains the most complicated single postcard within my collection.
Posted by The Filmatelist at 8:08 PM No comments: