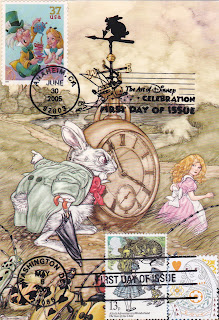 There are two types of Tim Burton movies—ones which are largely original, inventive, joyful, and inspired: Pee Wee’s Big Adventure, Beetlejuice, Ed Wood, The Corpse Bride. And then there are the adaptations. (shudder)

Despite the assumption that he loves these properties he chooses to embrace, he seems to have an underlying contempt for them too. How else to explain the turgid Sleepy Hollow, the embarrassing Planet of the Apes, the woeful Charlie and the Chocolate Factory? And now the abysmal Alice in Wonderland, which appropriates all the trappings of Carroll but none of the cleverness or sophistication. It's an ugly movie, and an unfortunate one.

Although they have a decidedly dubious record with adaptations, too (even recent “classics” like The Little Mermaid or Beauty and the Beast can’t hold a candle to Andersen or Cocteau), the people at Disney managed to maintain a sly, misanthropic perversity in their 1951 version, perhaps the last time the studio embraced a truly surreal sensibility in its animated features. But for a real innovative adaptation of Carroll—true to the spirit but still singularly original—you need to pursue Jan Svankmajer’s remarkable stop-motion Alice (1988), or the fantasy sequences in the small treasure Dreamchild (1985). Both are quirky, visceral, and visionary.

As for Johnny Depp? His creative marriage to Burton used to highlight a quirky worldview in the interesting, underrated actor of the ‘90s. But now, in the days of the ever-more-tedious Jack Sparrow, it just feels like artistic laziness. Even the Oscar nod for Sweeney Todd is explainable only if you’d never heard a single cast album of the brilliant musical—in short, a worthy effort that longs for someone with real singing chops and not just brooding and viscera. Depp used to actually appear in fantastic movies: Dead Man, Donnie Brasco, Ed Wood. But that seems like a lifetime ago. 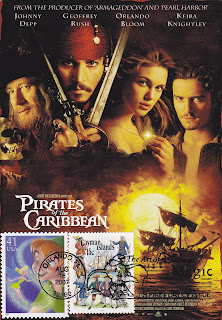 The Disney stamp releases of Alice (Scott #3913) and Peter Pan (Scott #4193) were an excuse for me to pull a few other postcards from my collection. This Alice illustration doesn’t have an ounce of cutesiness in it and more closely resembles the 1979 British Alice stamp, which I piggybacked on the FDC of the Queen of Hearts USPS Love stamp release (Scott #4405). The Cayman Islands stamp I ran across as a happy accident, and had enough of a pirate feel to marry to the Peter Pan postmark and the one-sheet of the first Pirates flick.
Posted by The Filmatelist at 7:12 PM No comments: