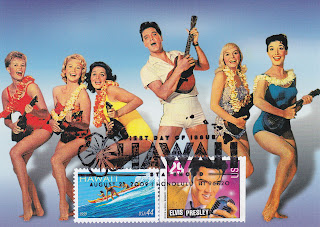 I’ve been to Hawaii twice.


The first time, my family took one of those island-hopping cruise ships—still the largest boat I’ve ever been on, but tiny compared to some of the mega-liners that exist now.  I was in the throes of puberty and its typical self-loathing, and there seemed to be plenty of things to do for adults or kids, but not much in that limbo range of early adolescence.  I don’t remember much about the boat except playing chess with my dad in one of the lounges, and spending a lot of time in the movie theater they had on board, in the bottom of the ship.

They would loop the same movie all day, a different movie each day.  Usually, it was a bad contemporary movie (City Heat with Burt & Clint, Oh God, You Devil with George Burns) but they also showed Blue Hawaii (1961), my first real exposure to Elvis, since we didn’t have any of his music in the house growing up.  Directed by Norman Taurog (the only Oscar-winner who would helm The King), it wasn’t very good but it was my first exposure to Angela Lansbury outside of Murder, She Wrote (a staple in our home) and the first time I ever heard “Can’t Help Falling in Love”, the only decent song in the film.

Love and Romance, back then, were just an abstraction—seemingly unattainable, completely alien to how I saw my life, myself.  But overflowing with hormones, I was still swept up with the longing of it, if not the hope.  That song, so simple, talks about Fate, the sheer inevitability of feeling that happens when your heart is affected.  There’s no reciprocation in the song, no relationship.  It is simply confessional, embracing the truth that at the right time, the heart knows what it wants.  Even if it keeps that truth to itself.  I had grown up along the Pacific, but it had never seemed so big than when I was on that boat.  And me, so small.

The second time I was in Hawaii, I was married.  A good friend was a pilot for the now-defunct Aloha airlines and we paid him and his girlfriend a visit.  My wife and I loved taking road trips so all we did in our free time there was circle Oahu by car, stopping every couple miles to visit one magnificent (and deserted) beach after another.  At one point along the drive, we encountered what looked like the remains of a terrible plane crash—except there were no emergency response vehicles, but a more sedate bustle and a road block that cut our excursion short.  It wouldn’t be until the following fall’s television season that this mysterious sight would be explained.  But mostly, the two of us just used paradise to escape, with the beauty of the island surrounding us.  Honolulu held little interest.  This was about exploring and getting Lost together.

I’m not married anymore, but no talk about my past travels is adequate without discussing my ex.  Like I’ve said before, we made a good team, and that was no truer than when we explored the world together.  We had different interests and tastes, but the pace at which we took things complemented each other perfectly, and the world seems, in a certain way, smaller without her.  Left to my own financial devices now, it’s certainly more inaccessible.  I’ve been to some truly amazing places, but there are many I’d still like to visit someday.  Perhaps I will.

When I first stepped foot on Kauai, it was literally the most beautiful place I’d ever been in my life.  But I’ve been to the islands twice now, and other places call to me far more.  But more than that, there is something unique about Hawaii for me.  Distinctive in its nature.  Whatever travels I see in my future, I foresee doing them alone.  And that’s ok—I love traveling, exploring, discovering by myself.  Which is why I probably will never go back to Hawaii.

Because Hawaii is different.  Hawaii is for sharing. 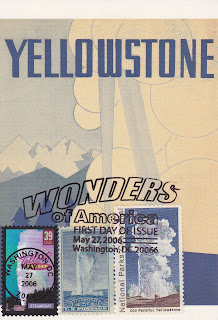 The Classic Elvis stamp (Scott #2721) is paired with a Hawaii statehood stamp (#4415).  The Steamboat Geyser stamp was part of the Wonders of America series (#4059), here paired with another Yellowstone geyser, Old Faithful (#1053) and one celebrating the park itself (#744).

Posted by The Filmatelist at 5:16 PM No comments: