Growing up, Charlton Heston was a perpetual fixture in our household (where he was affectionately known as “Chuck”). This was largely because of the annual Easter broadcasts of The Ten Commandments and Ben-Hur. It was the movie star my mom talked about the most, and years before I saw the film, I knew how El Cid ended because of my dad’s vivid description.

It was later that I discovered the various apocalyptic films of his later career, from the atrocious Earthquake to the priceless Soylent Green and The Omega Man, which found their own perverse redemption in his totemic campiness. Always square-jawed and overly-committed to whatever catastrophe he was facing, from ant armies in The Naked Prey to circus train derailments in The Greatest Show on Earth (a misnomer if you ever heard one), he might be great fun, but I never considered him a good actor.

But he could be. Probably the greatest surprise of Kenneth Branagh’s Hamlet was that, among a cast of legendary British thespians, the best performance was Chuck’s as the Player King, full of authority and gravity, his commanding voice so beautifully suited for the Bard when I had become accustomed to hearing him quote sword-and-sandal scripture-lite. I’ve owned the beautiful soundtrack for Antony & Cleopatra for years but have never seen it, though one day I hope to. 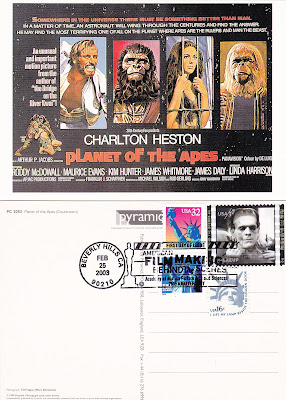 Though Orson Welles' brilliant Touch of Evil remains his best film, a personal favorite is Planet of the Apes (Schaffner, 1968), a film that could easily lose itself in the premise and prosthetics if not for Chuck, who grounds the film as Everyman, a sci-fi Adam who sells the confusion and absurdity of his predicament with the type of commitment the film needs. I won’t necessarily argue that it’s a great performance, but it’s calibrated exactly to the picture’s benefit, and be it his artist’s instincts or just the result of astute casting, that final moment on the beach is iconic for a simple reason. It works. RIP, Chuck.

Chuck may get his own stamp one day, which is why I’ve saved the front of the postcard for him. But the makeup was much celebrated at the time (it won a special Academy Award since the category didn't even exist yet) and it seemed a perfect opportunity to add as many Statue of Liberties as I could muster: Scott #2599 , 3451, and especially 1599, which itself appears to be peeking its head out from some futuristic horizon.
Posted by The Filmatelist at 3:36 AM No comments: