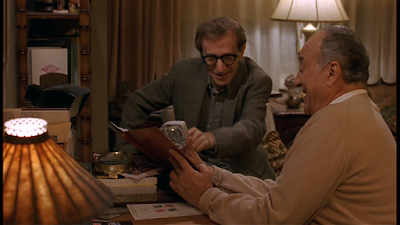 I don’t really talk about my stamps much in real life.  People know about the blog (I’ll post a link periodically on Facebook or Twitter), but I don’t converse much about this pastime to friends nor volunteer that I have a blog--let alone what it’s about--in social situations.  The reason of course is that most people’s hobbies are not at all interesting to non-aficianados, and an innocent question in polite society could easily suck the unsuspecting down a vortex of hopeless minutae that one can instantly regret.
The perfect cinematic example of this is in Woody Allen’s very funny Manhattan Murder Mystery (1993), where a couple, Larry & Carol Lipton (Woody and Diane Keaton) slowly get embroiled in the possible murder plot of an unassuming neighbor, a passionate philatelist whose primary character trait is a gregarious eagerness to bore people with his collection, something Larry learns quickly when he and Carol first pay him and his wife a visit.

Paul (Jerry Adler): “Now let me show you a mint 1933 airmail—very rare and very beautiful.  Look at that.  And this plate block is quite unique because it has a flaw in the engraving.  See if you can see it.”
Larry: “It’s hard for me…”
Paul: “Give you a little hint, right down here in the corner.  Interesting.”
Larry: “That little tiny thing there?”
Paul: “That makes it quite valuable, you see.”
Larry: “Ah-ha.”
Paul: “And I just got in a commemorative set of issues that are going to be quite valuable, too.  Look at the color work there. Look at these presidentials.  Look at the color work.  Even the perforations are still intact.”

Of course, his hobby is open season for Woody’s commentary after their visit is over

Larry: “Jesus, couldn’t you keep the conversation going a little longer in there?  I was signaling you frantically.”
Carol: “I was just trying to be neighborly.”
Larry: “Neighborly?  If this guy showed me his stamp collection one more time…My favorite thing in life is to, you know, look at cancelled postage.” 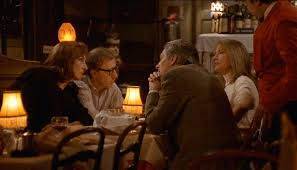 Once the wife dies, supposedly of a heart attack, Carol’s suspicions are aroused, which are only fueled by a friend of theirs, Ted (Alan Alda):

Ted: “Maybe this guy killed her, you know?. Like he’s got like a young tootsie stashed someplace.”
Larry: “No, no, not this…you gotta, you gotta see this guy.  This guy gets his jollies from licking the back of postage stamps. He’s a boring, old…”
Ted: “I could see that.  Depending on whose picture is on the stamp.”

I suppose it’s a bizarre backhanded compliment to think that stamp collectors are so boring, we’re incapable of nefarious doings, but it turns out Ted is right, and along with the help of Woody’s client, writer Marcia Fox (Anjelica Huston), the unlikely foursome get to the bottom of some increasingly mysterious clues and developments, but not without some hilarious digressions along the way.
It may seem sacrilegious to say it, but I prefer this Manhattan to Woody’s more heralded Manhattan from 1979.  For me, that film, awash with Gershwin music and Gordon Willis’s B&W photography, has some marvelous elements but is less than the sum of its parts.  The film feels glossy, fabricated, with some good one-liners but dialogue that overall feels like it’s trying to one-up Annie Hall.  Everyone feels rooted in type and it never quite gels for me.  Plus, the most beautiful performance, Mariel Hemingway’s, is in the service of what still feels like a skeevy March-November romance.  It’s his most overrated movie, I think, and one that mostly inspires in me curiosity of what he could've done with Meryl Streep in more than just a bit part. 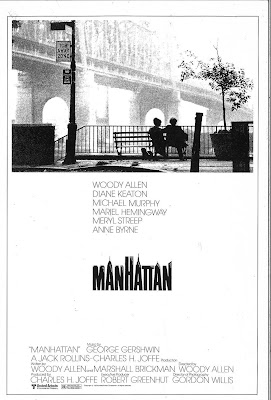 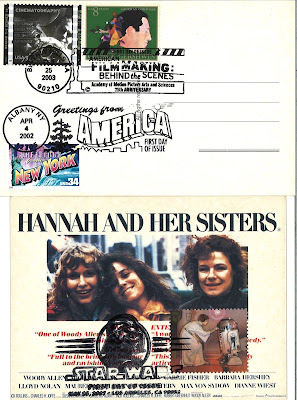 Mystery has modest intentions, but it actually does deliver on all cylinders.  The mystery is a good one, with the menace comic but also very real.  This is also probably Woody Allen’s least dysfunctional relationship depicted in film, with his reunion with Diane Keaton an effortless one.  Their dynamic of a married couple, still endlessly charmed by each other even though the irritations and restlessness of familiarity abound, is instantly believable.
It’s also a wonderful reassembling of two other major forces in Woody Allen’s best film, Crimes and Misdemeanors from four years earlier.  Here Alda still has that borderline-unctuous personality, but in a very likable way (think early MASH).  And Huston does a 180 from her ill-fated Dolores Paley.  She’s smart, fearless, stylish, and quick-witted.  In her career, she’s often traded on an ominous sensual presence in films like The Grifters or Prizzi’s Honor, but I think this is her sexiest role by far, and she’s fabulous.
It also is very knowing about the crime film, Woody being a voracious cinephile, and it upends the genre’s conventions at every turn.  There are few setpieces funnier in his films than the phone call with their suspect, each amateur sleuth armed with a tape player trying to keep a fabricated conversation on the rails.  And of course, the wry Lady of Shanghai climax is incredibly self-aware and undeniably perfect.  The film is a real gem.

Of course, we don’t actually see much of Paul’s collection, but that rare airmail stamp?  It’s gotta be this Century of Progress issue (Scott #C18).  Today’s mint value would be around $100, not bad but nothing compared to the Graf Zeppelin issues from just a few years earlier.  Then again, he does talk about an error on a plate block, so that would make things more, uh, interesting...
The New York stamp (Scott #3592) is from the Greetings from America issue, while the Cinematography stamp (#3772g) is from the American Filmmaking release.  George Gershwin is #1484, Glenn Miller #3098, and "Radio Entertains America" (#3184i) is from the Celebrate the Century series.  Marge Simpson (#4400) is voiced by Julie Kavner, who's appeared in 7 of Woody's projects, and Carrie Fisher (Princess Leia, #4143f) has appeared in just that one pictured.  As for the Martin Ramirez stamp from earlier this year (#4972)?  I thought it had a nice Art Deco vibe which suits that lovely period film nicely. 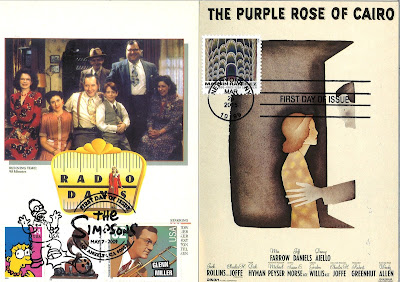 My 10 favorite Woody Allen films
Posted by The Filmatelist at 7:18 PM No comments: