Gone, but Not Forgotten

Even though I’m early by a few months to the exact date, 2010 is the 70th Anniversary of George Cukor’s The Philadelphia Story (1940) and another example where biding my time ended up paying off in a big way with my FDCs. I got this card after Cary Grant (Scott #3692) and Jimmy Stewart (Scott #4197) were already issued, so when the wedding set of ring and cake stamps came out (Scott #4397-8), I was tempted to try to squeeze the actors in as well. But while some stars may be Maybes when it comes to a future USPS release, I always knew that Katharine Hepburn was a Mortal Lock, so it seemed preferable to just wait and get all three lined up under one postmark eventually. Little did I suspect that her selection would happen so soon. And as you can see, the result is a real winner. 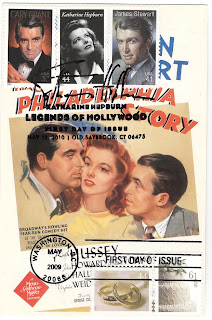 Many of the stamp designs in the Legends of Hollywood series have been serviceable at best, but I have to say that Hepburn’s is beautifully rendered and probably the most striking of not only the series, but of any USPS issue in recent memory. Aside from Hitchcock’s, it’s the only one in black and white, and the key light is very effective, creating an incandescent quality to an already terrific image. It’s an absolutely lovely tribute to a marvelous actress and to an era in Hollywood that is just a memory. I think it’s also interesting that, unlike Cary & Jimmy, she’s not looking at the camera, but upwards, as if pensively deciding which of the two to choose. Another nice touch is that the suit Stewart is wearing in the stamp is the exact same suit he’s wearing on the one-sheet! Got really lucky there.

I’ve always had mixed feelings about Philadelphia, its “classic” status notwithstanding. It's superbly acted, of course, but still never quite feels divorced (ha!) from its stage origins, and I still think it suffers a little when compared to either the magnificent His Girl Friday (also w/Grant) from the same year, or Bringing Up Baby or even Holiday, which Grant & Hepburn made together two years previously. Engaged to uptight fiancée George (John Howard) and pestered by her roguish ex, C.K. Dexter Haven (Grant), Tracy Lord (Hepburn) has, the day before her wedding, an encounter with visiting reporter Mike (Stewart)—one that’s brief but which still proves formative in allowing her to fully realize what she knows she wants deep in her heart.

Like my real life persona, this blog has never really been eager to share many personal revelations. I usually prefer to play things close to the vest. But today being my 40th birthday, I’m feeling unexpectedly wistful. For a long time, I was never quite convinced by this connection (for lack of a better word) between Tracy & Mike. Mike knows that he’s not right for her, but he still falls and falls hard. And as fate would have it, he is exactly what she needs at that moment, for the circumstances around their connection compel her to decide between Dexter, the man she was meant to be with, and the rigid and judgmental George. I’d always wondered if you could really spend less than 24 hours in someone’s company and still know that you wanted to share a lifetime with them. Romantic comedies are usually designed to sustain us with fantasies about fate and resolution, closure and kismet; whereas the truth was that in the real world, it was always more common for me to feel like a Ralph Bellamy than a Cary Grant.

Yet, fate sometimes has a funny way of completely subverting all your expectations. Because, for one incredible series of moments, I became a “Mike” myself (I was told once that Sept. 30 is a good day for Mikes). As the Dire Straits song from their album Making Movies goes:


Juliet, the dice was loaded from the start
And I bet, and you exploded into my heart
And I forget--I forget--the movie song
When you gonna realise it was just that the time was wrong?

Even now, watching The Philadelphia Story feels a little like picking an old scab--one that still feels fresh. Mike proposes to Tracy, out of chivalry but also out of love; acting as a trigger to her awakening allows him to recognize something new and exciting in him, also. And a lifetime with a smart, spunky, creative, charismatic beauty--who wouldn't want that for themselves? But we know better. And so does she; she belongs to Dex. But after Tracy & Dex find their happiness, I still wonder about Mike--both his legacy and his loss. And sometimes, this Mike still wonders if his Tracy/Juliet ended up with a George or a Dexter. I always hope the latter, though if he’s anything like most of us guys, he’s probably a bit of both. For things are rarely as clear and clean-cut as in the movies.

Remembering things, both personally and institutionally, is an impulse that we can rarely escape. Birthdays commemorate another year gone by. Stamps memorialize our history and our shared and varied culture. Movies so often act as a record of our dreams and idealizations. And for me, even the happiest of films in the most happy of times still evoke that low-lying poignancy, of being that Mike on the margin and the distant echoes of that singularly special Friend and Lover, dearly missed, gone but not forgotten.
Posted by The Filmatelist at 7:23 AM No comments: