When Do the Right Thing came out 20 years ago this year, did Spike Lee have any idea that a day like this would happen as soon as it has? I doubt it. 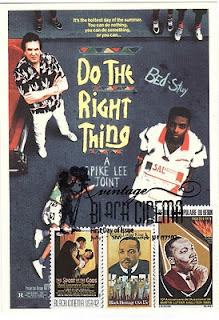 In Lee's masterpiece, it's not the heat but the humanity that ignites a racial firestorm in a colorful Bed-Stuy community one summer's day. The fashions may have changed, but the film is still as volcanic and mesmerizing as ever, from the opening credits of "Fight the Power" to that final image of the photo of the Rev. Martin Luther King, Jr., and Malcolm X, pinned to the wall of the burned-out Sal's pizzeria. And even though he may be more of an icon than a firebrand these days, I've enjoyed Lee's films since that Oscar-nominated effort--nowhere near as incendiary, but just as ballsy, opinionated, and unapologetic in its political and stylistic perspective. 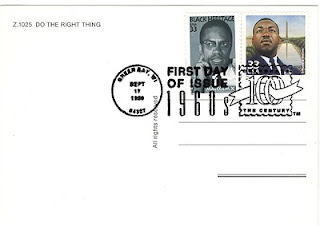 The lyrics of the opening Public Enemy song includes the lines:

Certainly the USPS has done a great deal to tackle diversity in its stamp issues, but plenty of people of color hadn't made the cut when the film was released.  That line is also a testament to how people perceive postage stamps as historical markers--a symbol of what our country self-identifies as important to commemorate and celebrate.

Given that photo that Smiley tries to sell in the film, positioning the stamps of King and Malcolm side-by-side was too irresistible for the postmark, though back in 1999, I was still cagey about using the front of the one-sheet postcards for the FDCs, which is why I used the back. The King stamp (Scott #3188a) was part of the Celebrate the Century series, and Malcolm X (Scott #3273) was issued the same year.

When the Vintage Black Cinema series came out in 2008, I used that opportunity to put some additional stamps up front--the original USPS MLK Jr. stamp (Scott #1771) from 1978, as well as one of him released by the People's Republic of Benin the same year. I've never seen The Sport of the Gods (Vernot, 1921) but it was the stamp that best matched the others so that's the one I used.

I don't think anybody believes the next four years will be easy. But it'll be nice to have a POTUS who will indeed (one hopes) Do the Right Thing.
Posted by The Filmatelist at 7:15 AM No comments: