Well, my first Mill Valley Film Festival in the Programming Department is a wrap and what a terrific experience it was.  But I think we could all use a break so, because it's the 25th anniversary of their biggest hit making the Billboard charts (at #29) back in October 1987, here's a video of The Other Ones singing Holiday:

Though not as famous as the Madonna hit with the same title from 4 years earlier, I've always loved this song, perhaps because it taps into my love of travel, though that's rooted less in escape than in joyful exploration and curiosity. In high school, when this song made the MTV rounds, I hadn't been many places yet but my wanderlust and urge to get out of suburban San Diego was undeniable.  "Distant lands are not so far away.  I don't know why we don't go."  The promise of a larger world held such romantic (in both meanings of the word) sweep, and by my senior year, I was incredibly impatient to get, well, anywhere.

As for the video itself, it's notable because it uses a lot of postcards as its visual theme, including one of the Golden Gate Bridge, which I cross weekly (since my office is in Marin and I often do something in The City after work).  You'll also note that some of the stamps used on the postcards are real: Scott #C101-103, part of the 1984 US Summer Olympics airmail release.  You can catch brief glimpses of them at time codes 0:32, 2:39 & 3:25.  Here's a better look at them below. 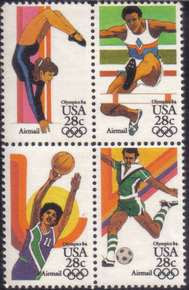 Posted by The Filmatelist at 3:37 PM

Email ThisBlogThis!Share to TwitterShare to FacebookShare to Pinterest
Labels: Sports