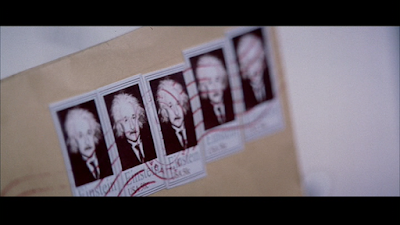 Happy Birthday to Albert Einstein, who was born on this date 136 years ago.  So why not discuss the action film where his postage stamps played a critical part of the story?  For I’ll be honest: I’m a sucker for time travel movies, so I have a weak spot for John Woo’s Paycheck (2003), flaws notwithstanding.
Now Paycheck is not a typical time travel movie because nobody actually travels through time.  Ben Affleck is an engineer-for-hire who builds a machine for billionaire Aaron Eckhart that can see into the future and right before getting his memory of the job erased (a scifi conceit that’s part of his employment contract), he leaves himself an envelope full of innocuous items—each of which his “future self” knows will (by virtue of using the machine) help him, since he can see that Eckhart plans to betray him.  From there, he is forced to go on the lam from both the law and a team contracted to kill him as he tries to unravel a past he doesn't remember. 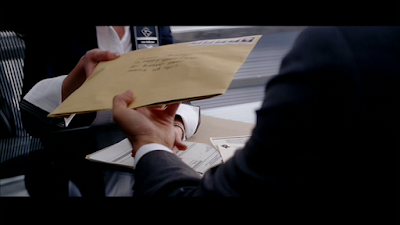 What first arouses his suspicion is that despite expecting a nine-digit payday for his years of service, he discovers that he had mysteriously declined his salary (one of many things he can't recall after this amnesia procedure) and this envelope of random junk he left for himself is the only thing he’s left with.   He first receives the envelope (with cancelled postage) from the registrar at the company:

Registrar: Your personal items.  You only needed four stamps.
Ben: Oh, well, I guess I can afford the extra 50 cents.

This is before he learns from her that he gave up the paycheck he had earned, something he can hardly believe he would’ve done voluntarily.  But very quickly, he realizes (after a narrow escape using a couple of the items in the envelope) that giving up his salary was his way of telling himself that these items held enormous value while still getting that message past his employer who would’ve checked the envelope for anything unusual.
The rest of the movie is essentially one big chase film after that, so we see this envelope with the Einstein stamps over and over again, surviving shootouts and high-speed pursuits, since the contents of the envelope remain his only clues as to why he has been put in such peril.  Certainly, no philatelic items in film history are exposed to as much high-octane action as this set. 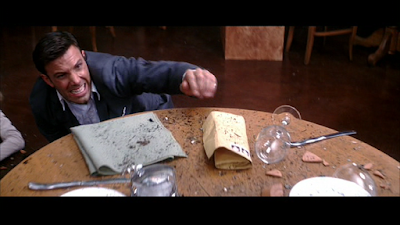 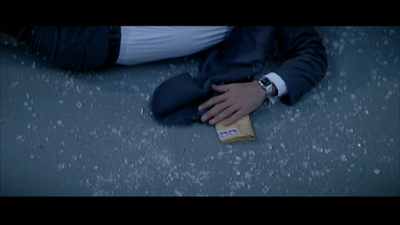 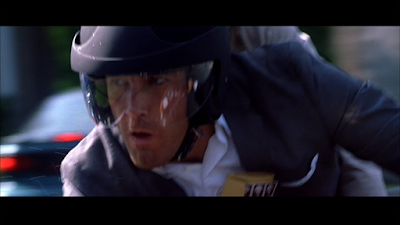 Eventually, he learns that he had a girlfriend (Uma Thurman) during his time at the company and despite not remembering anything about their relationship, he recruits her to his cause--she does remember him, after all--and she gets in on the action, too (although his assignment was top secret, so she doesn’t know exactly what he was working on either). 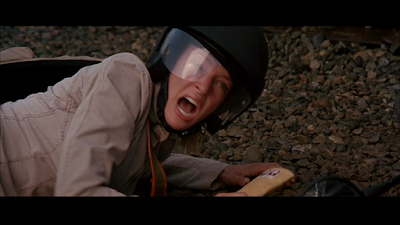 By this time in his career, Woo was on the verge of self-parody.  Face/Off (1997) was an irresistible acting tour de force as John Travolta and Nicolas Cage swap faces and personas, but all the incessant slow motion and flying doves and heavy-handed symbolism were getting to be predictable, silly stylistic flourishes.  The second Mission: Impossible film was completely undistinguished and the less said about the WWII Windtalkers the better.  So Paycheck is nice because the action is well-executed but isn’t as overly-orchestrated as we’re used to seeing from him.  And because Affleck is always problem-solving his way out of situations using the envelope’s items, it’s a movie that highlights the character’s brains over his brawn. 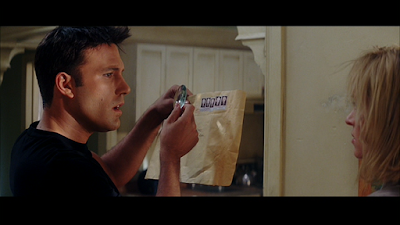 Ultimately, the stamps serve their most important purpose by explaining his situation.  He intuits that the excess postage itself was a clue and when inspecting the stamps closely, he sees that’s he embedded in Einstein's eye a set of microscopic pictures, “screen shots” from what he saw in the future-vision machine. 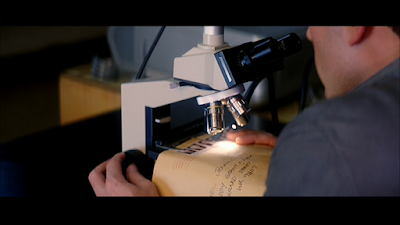 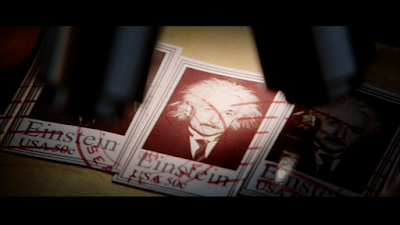 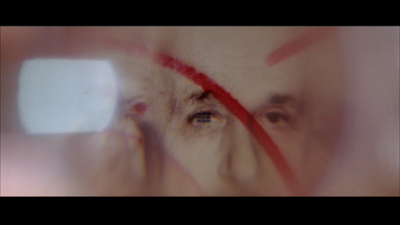 They are a series of newspaper headlines from the future showing that rampant abuse of the machine would destroy the economy, aggravate international tensions, and ultimately lead to global war.  Up to this point, he was able to stay one step ahead of Eckhart because he had put (pre-amnesia) a poison pill in the programming of the machine, temporarily sabotaging it so it couldn't be used.  But now, he knows he has to go back and destroy the machine for good with his dwindling supply of envelope “assists”. 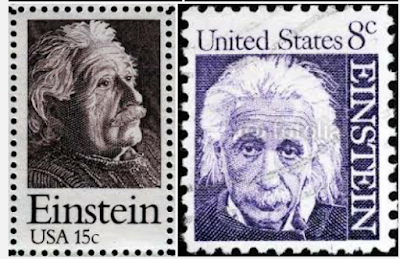 It’s important to point out that Albert Einstein does indeed have two different US stamps, an 8 cent and 15 cent issued in 1965 and 1979 respectively (Scott #s 1285 & 1774).  The stamp in the movie is neither of them.  So why manufacture a fake stamp?  One guess is that they needed a high denomination but still specifically wanted to use Einstein.  After all, Affleck does have this conversation with his one other close confidant, Paul Giamatti.

Giamatti: Look, if we know anything, we know that time travel’s not possible.  Einstein proved that, right?
Affleck: Time travel, yes.  But Einstein was very clear that he believed time viewing theoretically could be accomplished. 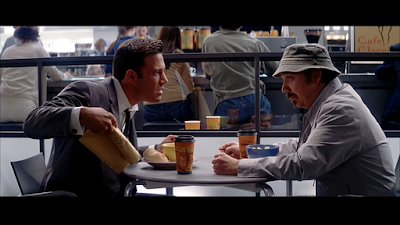 It’s from this conversation that they speculate how he was somehow able to anticipate these items being critically useful to him and, by extension, guess what he had been building in this mystery job assignment.  So the Einstein stamps not only see a ton of action, but they act as a thematic reference, too.
Paycheck isn’t a great film—Ben and Uma have zero chemistry and there are a few too many explosions by the climax—but I like the puzzle aspect of decoding the usefulness of each individual item, and the envelope itself and the persistent inventorying of its contents hearkens back to that other (far better) stamp movie, Charade.
This was the last film Woo made in the states, returning to a very different Hong Kong from when he made the legendary The Killer, Hard Boiled and A Better Tomorrow.  Here's hoping one day he makes his way back across the Pacific; it'd be interesting what the intervening years have taught him.

Posted by The Filmatelist at 2:04 PM No comments: