Westpex is the annual postage stamp convention that I attend every spring—-the biggest on the West Coast and held near the San Francisco International Airport (it used to be in downtown SF back when I first started going). It’s always interesting going because my brand of covers and collecting doesn’t have much credibility among the old schoolers in attendance. In fact, even though I’m in my late 30s, I still skew in the youngest 10th percentile among the attendees. While there are efforts to outreach to youth, it still remains essentially an old person’s hobby (and, from the looks of the attendees, predominantly male as well). 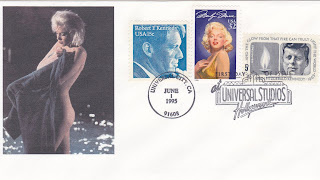 It’s pretty rare to find a postcard FDC like the ones I create at these things, but sometimes I do find something else interesting that has a cinematic connection. This Marilyn Monroe cache and cover is a good example. The idea of using older stamps that have some kind of thematic relationship to the subject never really occurred to me until I ran across this item years ago. Now, the reason you see so many other, older stamps tied to the First-Day-of-Issue postmarks I collect is because I was inspired by this piece.

Monroe was, of course, the first Legends of Hollywood stamp release (Scott #2967). The numerous Monroe postcards I created for that issue is a story for another day, but nothing I did was as inventive as this Kennedy collaboration, using both JFK (Scott #1246) and Robert (Scott #1770) to sandwich the tragic starlet, though I'd like to think the card with her and Ronald Reagan (Scott #3897) has its own charm. 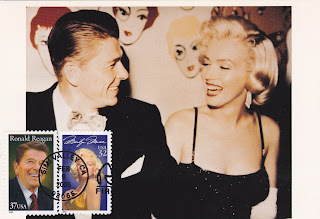 Posted by The Filmatelist at 4:57 PM No comments: