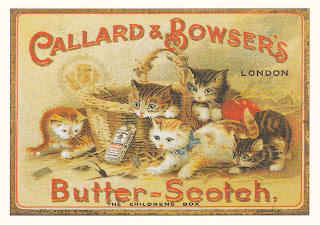 Tammy was 17 and both a sweetheart and a diva. Biggie was quite a bit younger and the friendliest cat I ever met. And in the span of the last 3 months, they both had to be put down, and the homestead is not the same. Ever since her brother Max died (another amazing kitty), Tammy would sleep every night on my pillow. Biggie could have his belly rubbed for hours, and would intrude incessantly if he saw you working in the garden. Her spirit was strong but her kidneys gradually failed her. The tumor in his lung came out of nowhere and in a matter of weeks had overwhelmed him. She doesn’t lecture me anymore if I stay up too late. He no longer appears out the backdoor, waiting to be fed. And I miss them both terribly. 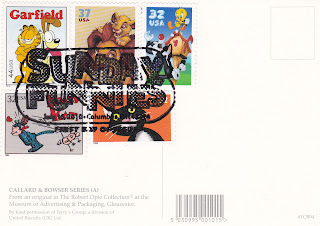 With cats on the brain (but no longer on my lap), I found this postcard and ran down a few older feline stamps to pair up with the recent Garfield issue:

Plus, the cat from Bright Eyes, a postal strip of cartoon animal stamps (Scott #3232). I could’ve also included the Cat in the Hat stamp from the Celebrate the Century series, but the Seuss creation never really looked or felt like much of a cat to begin with.

I suppose I’ll add more cats to the postcard (as well as my home) at some point, when the time is right. But for now, RIP to two truly irreplaceable kitties.
Posted by The Filmatelist at 5:02 AM No comments: 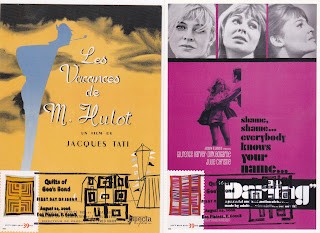 While most of the time, the stamps I use for these covers apply to the movie posters in question for obvious reasons (a film’s star) or tangential (a location or subject matter), sometimes, I choose them for purely visual reasons alone.

The Quilts of Gee’s Bend postal issue presented itself with an interesting opportunity because, while having nothing to do with film, the beauty of the quilts themselves I knew I could pair with some of the one-sheets in my collection—in this particular case, Monsieur Hulot’s Holiday (Tati, 1953) and Darling (Schlesinger, 1965).  I think the results are interesting and striking.