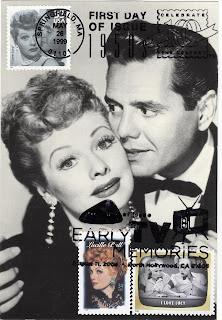 Of all the contrivances and far-fetched situations in Pretty Woman, the one that brought me most out of the movie was when Vivian (Julia Roberts) sits down to watch I Love Lucy and claims to have never seen the episode airing (“Lucy’s Italian Movie”, with the wine-stomping sequence). How in the world could someone from my generation make it to their mid-20’s and not have seen that? Growing up, Lucy was ubiquitous, airing constantly in endless rerun loops, a touchstone (along with The Twilight Zone) to television’s past that everyone seemed to have in common.

Of course, before Ricky & Ethel & co., Ball was a movie actress, though I’ve only seen a handful of her pics (most notably the entertaining Stage Door and Dance, Girl, Dance), though that’s still probably more than most. And she's terrific. She also had some turns on the musical stage, but it’s in that New York apartment that she’s best remembered, for it’s hard to imagine any movie showcasing her brilliant comedic timing & physicality as well as all those Lucy episodes. Being a child of an interracial couple, her marriage to Arnaz (and the inherent culture clashes involved) seemed perfectly normal to me, so I failed to see how ahead-of-its-time it was (as was her pregnancy on the show). It’s also interesting that the first time I ever encountered the name of Karl Freund, the extraordinary cinematographer of Metropolis, Dracula, and Camille, was on her show, where he helped pioneer multi-camera sitcom shooting. So in the movies, she was an able ensemble player, while on TV, she was nothing short of an hilarious revolutionary.

Ball is one of only three women in US Postal Service history to be on at least 3 different stamps (the others are Queen Isabella and Eleanor Roosevelt). The first, from the Celebrate the Century series (Scott #3187l),matches the postcard I had very nicely. The other two are from the Legends of Hollywood series (Scott #3523) and Early TV Memories (Scott # 4414b)
Posted by The Filmatelist at 4:55 PM No comments: