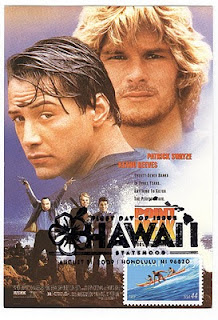 Congrats to Kathryn Bigelow for being the first woman to win the Best Director Oscar. Though highly-praised in some circles, I find Point Break, which she made back in 1991, is a joyless absurdity, with laughable performances across the board. I think Swayze and Reeves get a bad rap sometimes, but here they’re hopeless, fighting tooth and nail to see who can be less convincing—a renegade FBI agent or a craptastic hippie surfing guru. Bigelow has chops and has managed to create some flawed but engaging films from questionable material (Near Dark, Strange Days). But Point Break is epic loads of d-u-m-b. Here’s hoping, post-Hurt Locker (an undeniably terrific film) that she isn’t relegated to grade-B material anymore, even if she notches a failure or two on her belt (like many Oscar-winning male counterparts have).

Point Break doesn’t take place in Hawaii, but I used the statehood stamp because of the surfing motif.
Posted by The Filmatelist at 8:49 PM No comments: