New articles, some recent and others previously in limbo but now finished:  ET and the joy of bike riding; 2001 and my first encounter with art; Billie Holiday and my love of classic singers + King Kong, Toy Story, James Bond, and the Sight & Sound poll.  Plus, more maximum cards, bad postmarks, the yearly wrap-up, a birthday greeting to my niece, and of course, Oscar season is under way.
Posted by The Filmatelist at 8:04 AM No comments: 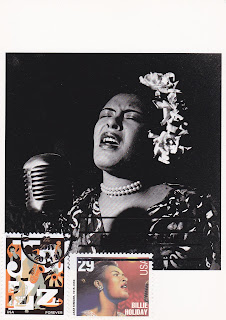 Given that he’s made nothing but crappy movies for the last 15 years or so, it’s easy to forget that Steve Martin used to be a small, cinematic treasure.  And revisiting The Jerk (C.Reiner, 1979) again, with its goofy unevenness, brought back to me a scene I had completely forgotten about: Navin and Marie (Bernadette Peters) singing the tender, poignant "Tonight You Belong to Me" on the beach, by firelight.

I’ve been told more than once that when it comes to music, I was born too late.  I don’t mind modern music, but the truth is that since I left college two decades ago, I’m exposed to it very little so don’t indulge in it much.  My heart truly belongs to the Great American Songbook and the great jazz singers of a bygone era.

But there’s something very curious about those songs that I love by Cole Porter and the Gershwins, Walter Donaldson and Rodgers & Hart.  I adore listening to them (and do so constantly), but never feel compelled to sing along to them.  My favorite sing-along album is We Shall Overcome, Bruce Springsteen’s covers of Pete Seeger songs, and if I ever do provide vocal accompaniment in my car, it’s usually to Johnny Cash or Marty Robbins. So the domain of classic folk and country are fertile territory for my (limited) vocal range.  But those jazz standards occupy a special place where I don’t feel entitled to tread.

The USPS just announced that Cash will be getting his own postal issue this year.  And while many singing legends (Ella, Dinah, Frank, Patsy) got their own stamps years ago, it’s a tribute to his longevity that Cash was only recently eligible for the honor.  And while there are some legends of that time whom I’ve seen in concert (Blossom Dearie, Tony Bennett, Willie Nelson), I’ve always regretted never going to see him perform live.

We all, in our own ways, find connection and belonging through music, though most of what I listen to was made long before I was born.  Maybe that’s why one of my favorite musicals is Pennies from Heaven (Ross, 1981), also with Martin and Peters, because its entire soundtrack is full of these vintage beauties.  But as far as great musicals go, the film is still unusual because it inhabits the gulf between the fantasy life which music provides and the real life we actually face.  Throughout the film, nobody sings; rather, they all lip synch to those classics from the 20s and 30s.  But they never do these mimes as performers in the story.  What they do is lip synch in their own fantasy dreamscapes, psychologically allowing the songs to fill the ache, the emotional void that we feel every day but keep hidden.

As a result, I know of no other musical which is as heart-breaking, not because of the tragic things that happen in the plot, but because the movie reminds us how fundamental music can be to buoy our spirits and provide an escape valve for the darker truths that our choices and damaged lives represent.  I guess that’s why I never sing to those songs.  Because I’m too busy listening, inhabiting, breathing them in.

But I love hearing them and have a sense of awe for people, professional or otherwise, who can sing them with such affection.  Singing in front of people solo is something I’ve never done (never even privately, one-on-one).  I always find safety in large numbers.  Church?  Fine.  Karaoke?  I’ve been tempted, but have never summoned up the courage.  Even the thought of such a simple duet as the one in The Jerk unnerves me—not  because I’m a bad singer (I’m not), but because it means opening up to something vulnerable (be it raw or playful) in myself.  That's something I rarely do.  Public speaking in front of large crowds scares some people but it’s never bothered me one bit.  But to sing is something different.  More naked.  Exposed.  Which is also why I admire people who can do it with joy and fearlessness. 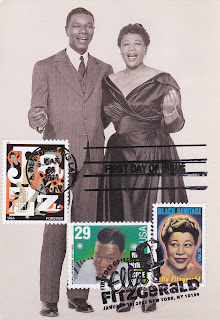 But while solo singing might fill me with deep trepidation, there is something else that fills me with actual fear—and that’s the dentist.  I won’t go into the childhood trauma I had that’s resonated with me since I was very young.  My dentist at the time was not a sadist (unlike the musical Steve Martin from Little Shop of Horrors), but what happened still had an effect on me like few other moments in my life.  Even now, the closest I’ve ever had to a full-scale emotional meltdown as an adult was because of that chair.

But that fear has been tempered by one simple thing, and this, again, is where music sustains me.  For of all the singers I love, there’s one I never actually listen to for fun.  And that’s Billie Holiday.  I own her CDs, and while a jazz compilation may bring up a song of hers periodically, I never sit down for an hour of her music like I can do effortlessly with, say, Nina Simone.  And that’s because whenever I go to the dentist, it’s a Billie CD I listen to.  I discovered quickly that Ella’s warmth, Blossom’s flirtations, Nina’s soulfulness aren’t what work for me at that moment of dread.  Maybe that’s because they represent my own aural dreamscape of what I long to be and feel.

But Billie’s sadness, even in the face of love and redemption, have always spoken to me in a special way—not in how I long to feel, but how I usually do every day already.  And so that’s why I cherish her and secrete that voice away in my heart and head.  Because like anything that sweet and precious, I only bring her out at those times when I need to be so fortified and comforted.  So in that chair is when I need her the baddest, and treasure her the most.  Her blues are my solace and in her voice, my fear doesn't just take leave, but evaporates altogether.  Without fail.  There may be singers I love more, but none whom I rely on so fervently.  Fine and Mellow indeed.

If I had to list 10 songs from that school of songwriting which I revisit most regularly, I suppose I might pick these: