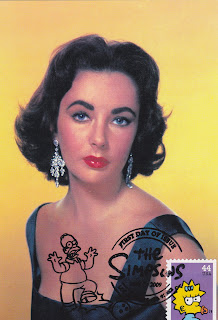 Elizabeth Taylor is one of those actresses who was legendary and much-celebrated but, for my generation, is better known for the drama of her life than the liveliness of her dramas. Her death is also bittersweet because while she was, in her prime, a truly epic beauty, I am hard-pressed to think of a single film of hers I’d want to revisit. Perhaps National Velvet (Brown, 1944) comes closest. Not that her movies were bad; Father of the Bride, A Place in the Sun, Who’s Afraid of Virginia Woolf? are all worth seeking out.

But none of them hold a special place in my heart. Perhaps the burden of being so gorgeous was that there was an implicit obligation to sweep her away in glamour and grandeur, with very little room for light, playful romance. So many of her films, once she reached sexual maturity, seem to take themselves far too seriously (to these eyes at least). And while she’s hotter than a Roman candle in Cat on a Hot Tin Roof, very rarely do I ever want to project myself into her films, filling the shoes of a Newman or Clift or Burton. Movies are the dream factory, but her films are someone else’s fantasies, not mine.

But there is plenty of evidence that she had enormous integrity and compassion, and had to shoulder her fair amount of loss and heartache along the way (much of it far too public in nature). So she still remains a legend to me, transcending art and becoming something more, both elusive and lovely.

While she played Tennessee William’s Maggie, she also played Matt Groening’s, too. And until she gets her own stamp, this beautiful still, with the Simpsons’ youngest (Scott #4403) in the corner, will suffice.
Posted by The Filmatelist at 3:31 AM No comments: