Meeting in the Middle

This is the 30th Anniversary of the American release of Sergio Leone's epic Once Upon a Time in the West (1968). Ambitious and full of memorable setpieces, it has remarkable dramatic and cinematic flourishes, but I still prefer the leaner, meaner The Good, the Bad, and the Ugly, perhaps largely because Claudia Cardinale and Charles Bronson don't really have the chops to breathe life into largely totemic parts; Leone always seems more comfortable exploring "Good" on a morally relative continuum, and while West succeeds in some of its broader brushstrokes, Jill & Harmonica are still plaster saints, making them dull compared to Frank & Cheyenne (Henry Fonda & Jason Robards, respectively). While the Dollars trilogy is driven by character complexity and shifting group dynamics, West feels overly reliant on the symbolic weight Leone invests in his heroes, forcing them to do the heavy lifting while the the villains succeed in evoking a greater range of emotions. The film's helped immeasurably by composer Ennio Morricone (who finally won a long overdue Honorary Oscar two years ago), who adds just the right amount of operatic sweep when the film needs it, bringing a sense of electricity and balance to what might otherwise seem ponderous or lop-sided. Overall, it's fun, reverent (perhaps to a fault), and the artistic highpoint of Leone's career. 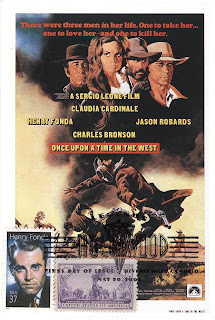 The FDC here is Fonda's from 2005 (Scott #3911). Along with it is the 1944 stamp commemorating the transcontinental railroad (Scott #922), currently the oldest stamp I've included on the blog and a key plot point for the film (in fact, the film was released in the US almost 100 years to the day of the driving of the Golden Spike, completing the connection of the two ends of the line). This is also the last illustrated postmark for the Legends of Hollywood that doesn't involve the star's autograph (a three-year trend thus far which I suspect may be a permanent one). And given the largely international flavor of the rest of the cast and crew, it seems unlikely that I'll ever have any additional USPS stamps to add to this card later.
Posted by The Filmatelist at 4:58 PM No comments: