The Hero of 34th Street


Miracle on 34th Street (Seaton, 1947) remains one of the best-loved Christmas films, and with good reason: it has a terrific cast (led by Oscar-winner Edmund Gwenn as Kris Kringle), a story that deftly balances seasonal uplift with modern skepticism, and a tone that never takes itself too seriously.  It's one of the few films I try to catch around this time each year.

But the film also stands out as probably the finest cinematic moment for the United States Postal Service.  As you remember, late in the film, the trial over Kris's sanity isn't going well, so Susan (Natalie Wood) decides to write him a letter, which her mother (Maureen O'Hara) mails to the county courthouse, via those vertical mail chutes you'd find in high-rise buildings from that era. 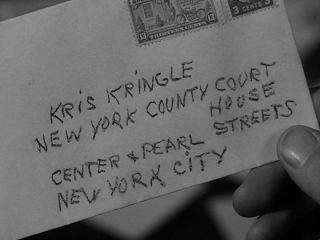 Note that the total postage is 16 cents--significant overkill since first class postage back then was only 3 cents! In fact, there wasn't a 13-cent US stamp issued in the entire 1940s and I can't find any evidence (based on the image) that this stamp we see ever existed at all.  Was it created by the production department specifically for this shot?  Very curious.  The 3-cent stamp looks like the Thomas Jefferson issue of the Presidential series (Scott #807).

We then cut to one of the New York City mail sorting centers, where a post office worker (we never learn his name) calls to his co-worker Lou to observe that of all the Santa letter's he's seen, none has been addressed like this one.  Lou has a newspaper and shows his friend the story of the court case, and this anonymous worker gets an epiphany:

“Hey Lou, how many Santy Claus letters we got down at the dead letter office?” 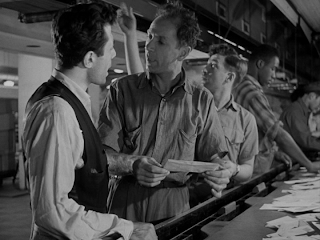 I've always enjoyed this sequence because of one particular detail--the incredibly casual way the workers would throw mail up in the air and over their shoulders, to have them caught in overhead circulation paths that route the various letters to their specific destinations.  It's such a great old school detail.

So, as we know, this brainchild proves to be the deciding factor in Kris's exoneration.  But before we get the familiar image of the contents of the mail bags--21 in total--being thrown on the bench of Judge Harper (Gene Lockhart)--the USPS also gets its own little public relations boost, as orated by lawyer/leading man John Payne:

“The Post Office department was created by the second Continental Congress on July 26, 1776.  The first Postmaster General was Benjamin Franklin.  The Post Office department is one of the largest business concerns in the world.  Last year under Robert Hannigan, it did a gross business of $1,112,877,174....Your honor, the figures I’ve just quoted indicate an efficiently run organization.  Furthermore, the United States postal laws and regulations make it a criminal offense to willfully misdirect mail or intentionally deliver it to the wrong party.”

And so with that combination of kismet and lawyerly quick-thinking, Kris is off the hook and Christmas is saved--all thanks to the USPS and its official recognition of Kris as the one-and-only Santa Claus! 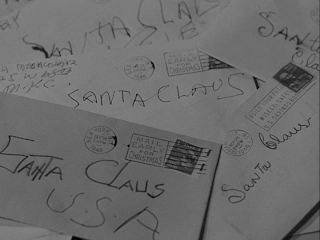 This shot comes from the pile on the judge's desk (we soon see him clear them out of frame to make his ruling).  Note the Jefferson stamp again, as well as the (insufficient postage) 1-cent Washington stamp (Scott #804) from the same series.  I like that there are different 1946 postmarks, too--though if you look closely, one of the postmarks is from Indianapolis!.  If there's no other address besides "Santa Claus", how did a letter from Indiana end up in a dead letter office 700 miles away?  Maybe they're not quite so efficiently run after all...