I've discussed a little about how I buy first-day-of-issue caches to supplement the customized postcards I create--particularly when they apply to film stamps that were issued before I began collecting.  This means that I've done my fair share of research poring through old stamp catalogs to see what kind of stamps (US and otherwise) are out there. 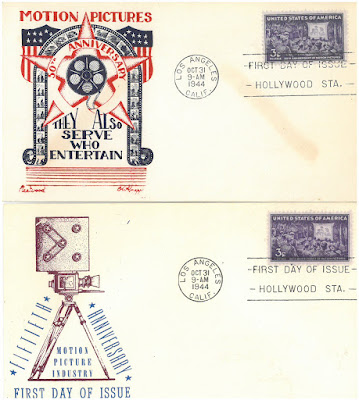 The earliest stamp I ever found that specifically referred to the art of cinema was this 1944 US release, commemorating the 50th anniversary of motion pictures.  Presumably, they use the creation of the first film (Fred Ott's Sneeze) in 1894 as a benchmark, though the first public cinema, a Kinetoscope parlor in New York City, also opened that year.  Because it's such an important philatelic issue given my "topical" interest, I've picked up more caches for that issue that I would've ordinarily.

You'll notice that some of these were postmarked in LA and some in NY.  While there is now a central office that handles First Day of Issue postmarks for any newly released stamp, it still appears that back then, some post offices would take it upon themselves to have a special postmark because of the demand and popularity of these kinds of collectibles. 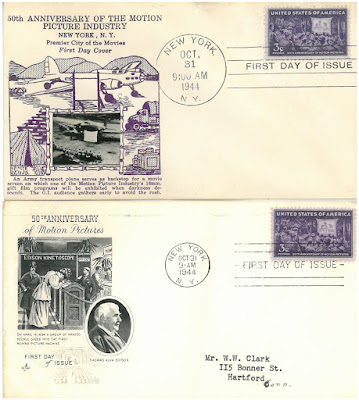 All these caches were mass-produced, so none of them is unique and I've seen other examples of the exact same illustration at subsequent conventions.  The more rare examples would actually be the bottom two, since they incorporate a later issue (The Films of 1939) to supplement the original--something which I'll be doing more of with samples in my collection in the future.

Even decades later, this 1944 stamp (Scott #926) remained very unusual and cinema-themed releases were few and far-between, outside of the occasional movie star.  So because the pickings were really slim for many years, it actually seemed conceivable that I could collect every cinema-related stamp made worldwide. 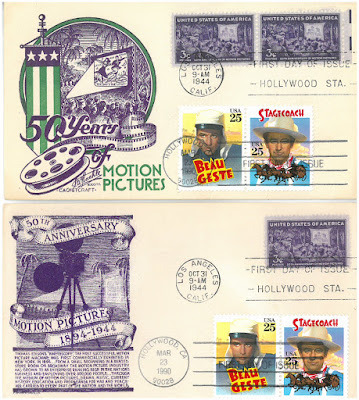 Then, the market exploded with souvenir sheets (usually from third world countries) specifically targeting collectors with appetites for celebrities and movie stars, and this ambition of mine became prohibitively expensive.  So while my collecting habits were two pronged for a while, I no longer worry about any new cinema stamps that are outside the US.  There are too many and the souvenir sheets are designed to be pricey.

But what I do have, I'll begin to post here, too, even though the cards and postmarks are my primary emphasis.


Posted by The Filmatelist at 5:05 PM No comments: 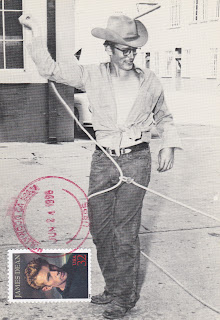 Sometimes, things don’t always go as planned when it comes to getting the postmarks back from the USPS—whether through a mistake on their end or lack of planning on mine.

For the James Dean issue back in 1996, it never occurred to me that I needed to ask for a special postmark.  I didn’t for the Marilyn issue the year before and they all came out uniform, clean, and sharp-looking.  But lo-and-behold, when I got them back, a majority of them looked like the one above: no special design and no indication that it’s even a First-Day-of-Issue.  As generic and undistinctive a postmark as you can imagine.

Curiously, a few of them were given a different postmark, as you can see below.  This design looks great.  Unfortunately, none of the ones with the stamp on the front of the postcard with the image were given this nice postmark. 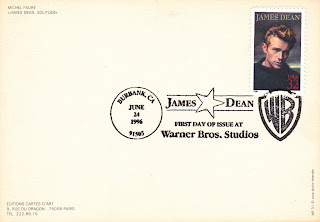 So clearly, since both postmarks were applied to my shipment, it was the choice of the person in the Postmaster’s office to use the crappy stamp for most of my cards, perhaps thinking it didn’t matter.
Now, every single time I send in a collection to be stamped, I include the following message on a post-it on every single rubber-banded bundle of cards:


Please Apply Illustrated First-Day-of-Issue Postmark on EACH card.  Thank You.

Of course, with many of these James Dean cards, the damage is done, so they sit together in a box, of negligible interest or value, testament to a lesson learned.

Posted by The Filmatelist at 6:34 PM No comments: