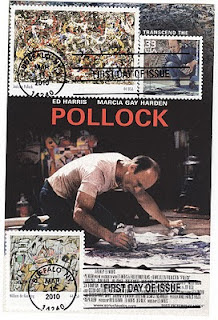 I am not a particularly creative person. My writing has always leaned toward analysis and academia-based essays, but never fiction. I have a musical sensibility, vocally and instrumentally, without the skill to match. My attempts at photography, juggling and magic are notable for their failure to go anywhere. Unless you count intentionally bad poetry (especially limericks), you might say the most creative thing I do is this blog and these postcards--which may not be saying much (whatever gifts I have lie elsewhere). But my tastes over the years have allowed me the opportunity to hang around dancers, musicians, photographers, filmmakers, all of whom have amazed me with their talent, but in an art form that I still found somewhat accessible, either from first-hand experience or long-term exposure.

But artists--painters, sculptors, mixed media--have always impressed me in a different way. Because I honestly don't know how they do it. Examining brush strokes up close in a museum never fails to leave me in awe, for every little dib and dab seems so arbitrary, random on its own. But the whole is greater than the sum of its parts, and seeing a canvas breathe life and force and intensity in its static frame is a thing of singular beauty that I don't feel in a position to scrutinize. With the other arts, I think I can provide some sort of critical perspective, because I understand the mechanisms behind creating harmony or dissonance, light or shadow, fluidity or gravity.

Of course, all these qualities apply to painting, too, and I've seen enough art (across four continents) to know that I like some things much more than others. But while I am personally discerning, I guess I feel less qualified to be judgmental. Because every achievement that works or connects with me, I see as a small miracle. And the ones that don't are miraculous in their own way, too. That's why I've never had an issue with "modern" art--for while it can be superficially assessed as simplistic or naive or lazy, it still was inspired by something powerful and elusive, yet rendered in front of me whole and concrete and fearless. I respect that a lot, and while I've known my share of artists over the years, I've never seen them at work, so the process is still couched in mystery to me.

Which is why a movie like Pollock (Harris, 2000), or any artist biopic, can be challenging. Because inspiration is rarely a simple throughline of cause-and-effect. The epic expanse of white that is a blank canvas would be terrifying to me, that first stroke too great a level of commitment. And while Pollock's process may involve more sheer physicality than a Da Vinci or Monet, conveying that window into his artistic mind can still be a difficult thing to dramatize. Very few movies have done it successfully, leaving the artist we love (no matter how well-acted) still an enigma, chronicling the events and external demons of a life but never harnassing the soulfulness that makes that art great.

I wouldn't know what makes a painting "great" anyway. Back in college, my friend in UC Santa Cruz had a Pollock-y painting on her dorm room wall that I thought was marvelous. Learning her 6-year old niece made it didn't change that opinion one bit. I have a painting hanging now at home, from a friend. It reminds me of Van Gogh, but with a pallette that's more verdant than I'm used to him. Is it any good? All I know is that I love it. 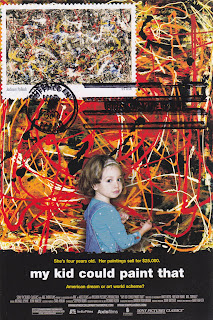 My favorite films about art are The Mystery of Picasso (Clouzot, 1956) and The Quince Tree Sun (Erice, 1992). Neither are biographies, but simple films about trying to capture that process, and depicting how the making of a piece (be it masterful or not) is itself a journey that's singular, with the rest of the world only seeing the final destination. They are both magical films, and ones that I never hesitate to recommend to my artist friends--though I never know if they've sought them out. For process itself can be sacred and private, and while other artists perform in front of audiences, a painter or sculptor rarely does. And it feels almost intrusive to ask about how those seeds are planted.

The Phladlephia Museum of Art. The Tate Modern. The Uffizi. So many I've seen and adored visiting, and so many more I'd like to some day. In a private gallery or a public square, I never tire of being left in awe. The stamps for Pollock and De Kooning (played by Ed Harris and Val Kilmer, respectively) were part of an Abstract Expressionist issue by the USPS (Scott #4444d & b), while the other Pollock stamp (nicly mirroring the poster itself) was part of the Celebrate the Century series (Scott #3186h)
Posted by The Filmatelist at 5:02 PM No comments: