Well, Avatar is now the phenomenon of the season and 3D has found yet another foothold in the public’s consciousness, once again hoping to be more than a flavor-of-the-month attraction. As the postcard reminds us, 3D made its first serious cinematic splash in the 1950s, with the classic anaglyph image (faithfully reproduced on the stamp) that required the red/blue cardboard glasses. The stamp is from the Celebrate the Century series (Scott #3187o) and represents one of the middle-of-the-road novelty attractions in movies at the time—not as important as widescreen or stereophonic sound, but not as brazenly goofy as those used by William Castle (“Emergo”, “Percepto”, etc.) 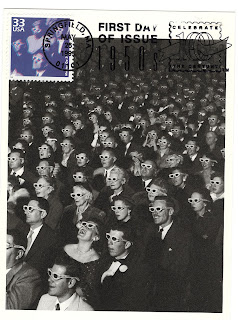 But while the technical components of 3D have improved dramatically since then, I’m still not convinced that the Emperor is sporting more than a Navi loincloth. Think back to the introduction of sound or 3-strip Technicolor to the movies: within just a couple of years, film directors were already going beyond the gimmicky phase of those technologies and creating beautiful, provocative pieces with those new tools in their kit.

But 3D has been around for over 50 years, and the number of genuinely innovative, artistic, non-gimmicky uses of the device can still be counted on the fingers of one hand. Henry Selick's recent Coraline was so unusual, and satisfying, because it effectively used the technology to enhance the theme and tone of the film, exploiting the multiple visual planes to create an increased sense of disorientation between Coraline's real world and the creepy mirror world she visits. The feeling was an immersive one, not just for its own sake, but to put ourselves in her state-of-mind, going beyond a Cinema of Sensation and really mining emotional territory from the effect.

But that has not happened in any of the other examples I've seen recently (including Pixar's Up, which used the device so unobtrusively that there was hardly a point to the 3D in the first place). For something to have existed this long and to have made so few genuinely creative inroads into the medium after all this time, I still have to consider it a gimmick—just one with more bells & whistles (and studio money behind it) now.

Predictably, every game in town is revamping their production slates to shoehorn as much additional 3D as possible into their choice tentpole flicks this year—even after-the-fact if necessary. I’m skeptical. We’ll see what the tipping point is before a public backlash occurs. For while people will pay premium pricing for Cameron’s magnum opus (as tedious, predictable, and visually superficial as I personally thought it was), are they going to be willing to shell out those bucks for every 3D film that comes down the pipe? I think we’ll have a much better idea by the end of the year.
Posted by The Filmatelist at 4:46 PM 1 comment: