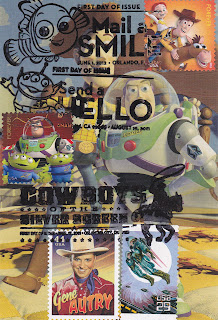 Now here’s an example of the bad postmark being 100% my fault.  You may remember the Toy Story card I had discussed earlier.  I really loved this assembly, since the Gene Autry stamp and the earlier science fiction stamp matched Woody and Buzz Lightyear perfectly.

I was incredibly surprised when the USPS issued two sets of Pixar stamps, though.  And when the first set came out with a set of 5 that included Buzz but not Woody, I knew Woody would be in the subsequent year’s issue.  So, now was an opportunity to get both on the face of the postcard, too!
Big Mistake.  As you can see, what was previously a wonderful looking postcard now is now an ugly, cluttered mess.  Part of the reason is the trend of the USPS of having their illustrated postmarks be much wider and denser with the ink.

But the larger failing was mine.  The card would’ve been much better with the two separate Pixar cancellations on the back of the card, but the thought of having them both on the front was too irresistible, and what resulted in the long run is a big old garbled mess.  You can still make the images out, but the impact of the first combo of stamps is now mostly lost.

Here’s an example of one issue that I did right. 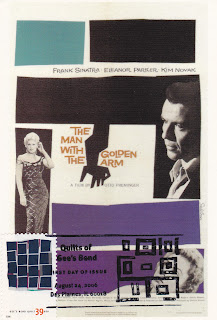 When the Quilts of Gee’s Bend issue came out, this stamp worked uncannily well.  Using it was a no-brainer.  So when Sinatra came out two years later, where should I put it?  Logic dictated the front but I couldn’t think of anywhere it could go without losing the effect from the previous stamp.  So I did this instead: 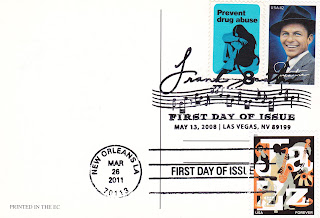 Putting the Sinatra stamp on the back meant I could add the drug abuse stamp without it cluttering things up further (Otto Preminger’s 1955 film was one of the first major Hollywood productions to deal with the subject).  Later, when the Jazz stamp came out, I added it to the reverse, too.

I’ve made other similar judgment calls on both sides, but while I’m glad I have a scan of what it looked like before, the Toy Story example is the one I still regret the most.