The Curious Case of "Bringing Up Baby"

Thanks to Hell On Frisco Bay for letting me guest blog on the upcoming PFA Howard Hawks retrospective and on the wonderful Bringing Up Baby (Hawks, 1938) in particular. 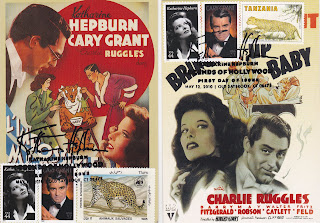 Here are a couple different Baby posters, both with the Hepburn FDC (Scott #4461) along with the Grant stamp (Scott #3692) and each with a different international stamp--a snow leopard from Afghanistan (c.1985) and a Zanzibar leopard from Tanzania (c.1984).

It's interesting that Grant looks like Clark Kent--though in a female's robe--in one of the poster's illustration, but in the opposite one, he's rendered like his more debonair self and nothing like how he appears in the film. 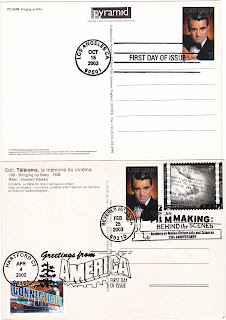 The back of the cards have Grant's FDC on one, and the FDC of the screenwriting stamp of the American Filmmaking series (Scott #3772a) on the other, with Grant piggybacking on that postmark. There's also an FDC of the Connecticut stamp (Scott #3702) from the Greetings from America series, the oldest of all the FDCs depicted here. Note also that the home Post Office for the Hepburn stamp is in Old Saybrook, CT, where Hepburn was raised and the state where the film takes place.

Posted by The Filmatelist at 12:10 PM No comments:

The Man in the Moon

While I may be a film archivist by trade and by training, I was a film lover far earlier, so I'm torn by Martin Scorsese's new labor of love Hugo (2011). For while I appreciate the passion for film it engenders, its embracing of the medium in its earliest days, and its position on resurrecting and preserving the past for future generations to admire and adore, it finds its way to this magical reenactment by way of high tedium. For Hugo the orphan waif is the least interesting thing about Hugo the movie, and the mystery that unfolds about his past and the way his fate intersects with Georges Melies is not nearly as enchanting or engrossing as it needs to be to justify the wait. Call him Oliver Listless.

I think Scorsese has always had this problem with period films. The Age of Innocence goes beyond conveying oppressive social mores and is itself suffocating amidst unimpeachable production values. Gangs of New York is all posturing until the point when the feuding tribes get overwhelmed by the larger sweep of history, a tantalizing promise of something grander that goes largely unfulfilled (compare this with Ron Shelton's lean, underappreciated Dark Blue ). New York New York is insufferable because we're on a journey with a protagonist who constantly offends but never intrigues.

In each, the tone is just slightly off enough that the experience is never full immersive the way his best films are. Scorsese's style is never invisible, for Taxi Driver or Raging Bull are special because of his unique perspective and directorial flourishes. But it always feels organic to the temperament of the narrative, setting or characters. No one will argue that GoodFellas is a short or economical film, but it's got blood in its veins and a pulse that propels you forward on pure energy, style, and a perverse combination of warmth and anxiety. But like the gadgets and gears that Hugo obssesses over, Hugo is a clockwork orange--hopelessly trying to resemble something sweet and fleshy, but all empty (and poorly-calibrated) mechanics inside. 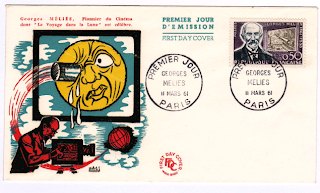 I will admit, though, that if the film does ignite renewed interest in early (pre-Griffith) cinema, that's always a good thing. Georges Melies understood the magical quality of cinema that had less to do with storytelling and more with showmanship. Camera movement, continuity, all the things we associate with cinematic "language" may have developed later, but he was never afraid to be as whimsical and fantastical as his imagination (and resources) allowed. And these moments of the artist at play are the best of the film, infusing real magic into the proceedings, because it's only at this point do we finally believe in what Scorsese is selling--not all the phoney-baloney 3D city-of-light trappings that proceed it (again, for a more luminous demonstration of the magic of Paris, just revisit Woody Allen's latest achievement, which finds that elusive balance of a grounded flight-of-fancy that such an amazing city deserves).

This French first day cover I own also represents the first filmmaker to ever get a postage stamp anywhere in the world (I'm not counting Edison or Will Rogers, who did get USPS issues pre-1961). The stamp itself depicts not only the legendary pioneer, but footage of the cannon that our intrepid lunar explorers use to reach their destination in the seminal Le Voyage dans la Lune (1902). But what everyone best remembers from the film is The Man in the Moon, irritated by the capsule that blinds one eye. Even a century later, it's still the most iconic cinematic image of that celestial body. The first time I remember hearing about the Man in the Moon was the nursery rhyme

"The man in the moon came down too soon,
and asked his way to Norwich.
He went by the south and burnt his mouth
By supping on cold plum porridge."

Little did I know that decades later, my love of film and the need to preserve it would take me to Norwich, but the image of the man irritated at his encounter with earthlings still lingered. In Scorsese's film, Melies (played by Ben Kingsley, the film's best performance) benefits by reconnecting with the real world. A new lease on life is possible once he lets other people in, and allows the past that haunts him to find its proper place, moving forward with his life instead of being crippled by grief or self-pity at past failures. And his legacy is reaffirmed as a result.

But this New Year's, I envy that Man in the Moon, so distant from human contact. For my failures are present and immediate, and my legacy far more dubious. And while the Man is usually perceived as observing remotely, separate and isolated, he still is the Moon and his orbital pull still affects the tides, despite his best efforts. The 1st is often a time for resolutions and the promise of renewal, and as far as new beginnings go, I've never faced so many or of such gravity as I do now. For me, 2012 will be about looking back (with nostalgia and regret) but still trying to move forward, step by step. Even if the destination feels as far away as the moon. And as lonely.

Posted by The Filmatelist at 4:56 PM No comments: