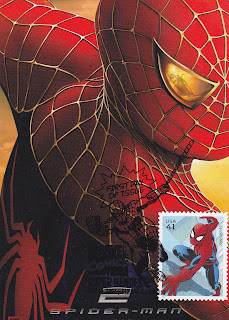 I already mentioned last year’s disappointing crop of comic book movies, and while there are high hopes for this year, I remain skeptical. I’m an enormous fan of Christopher Nolan’s version of the Caped Crusader, but has there ever been a third installment of a comic book franchise that didn’t suck? (The answer is Not Really). And while I enjoyed Sam Raimi’s first two Spider-Man movies immensely, it seems far too early to pump new blood into a body that hasn’t had time to get cold.

The two comic book titles I used to collect in middle school were Spidey and the Avengers, so the kid in me is excited about getting the team together, especially with the cast they have. But like the X-Men movies (which I haven’t cared for), will the assembling of the team be at the expense of any interesting characterization from its individual members? The pedigrees on all the films are certainly promising. We'll see. 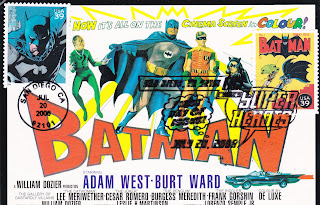 We’ve already seen Batwoman, but here’s a one-sheet for the Batman theatrical movie (Martinson, 1966) with TV’s Adam West, which featured his four biggest villains united together against him and the Boy Blunder (Scott # 4084e & o). The one-sheet for Spider-Man 2 (2004) has the wall-crawler stamp (Scott #4159a) and the two Avengers comic book postcards feature stamps for Captain America (Scott #4159o), Iron Man (Scott #4159h & r), and the Hulk (Scott #4159l), all of whom will appear in the upcoming film. 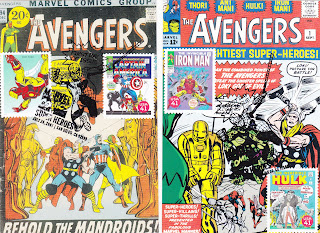 Posted by The Filmatelist at 3:51 AM No comments: