A View from the Bridge

A holiday standard now, Frank Capra’s It’s a Wonderful Life (1946) is a film that’s easy to take for granted and even easier to underestimate. The idyllic small town life of Bedford Falls, the overly-cutesy courtship of George and Mary, the knee-jerk sentimentalism about human nature are what we’d come to expect from Capra. And while there are charming moments or marvelous little grace notes, it’s undeniable that he lays it on a bit thick, especially with Clarence’s running commentary.

But Jimmy Stewart may be America’s greatest actor, and Life is a film on the cusp of his career, since it revels in his effortless folksy charm, often parodied but never less-than-believable, but it also anticipates the darker Stewart who’d flourish in the 1950’s—the Stewart with disturbing pathologies (the Hitchcock films) or with the raw nerves of obsessive behavior (the brilliant Anthony Mann westerns). For it’s in the last half hour that Life really takes wing, with a fantasy element that submerges itself into unadulterated nightmare. 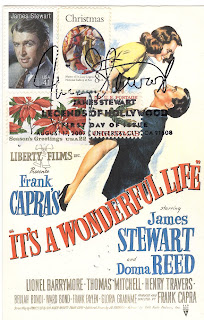 Much of Pottersville might seem pretty tame to us now. And I’ve known more than my fair share of librarians who laugh at Mary’s horrible fate without George (though it’s hard to imagine Donna Reed not ever landing another beau). But to have your world turned upside down in an instant, to have every memory and place and association called into question, to have your entire reality thoroughly upended (especially those things that you'd grown to love and cherish)—I can only imagine how horrible it must be. And Stewart sells it thoroughly. It's not a film I revisit often, but when I do, I am still surprised by the darkness at its center.

There are no shortage of Christmas stamps available, so when the Stewart release came out (Scott #4197), I tried to select some that had a very traditional feel to them and which matched the color scheme of the one-sheet pictured. 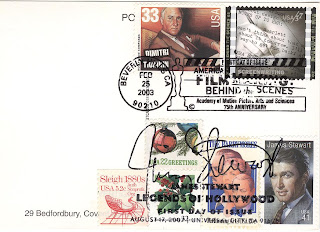 As for the reverse side, I figured throwing some more Christmas stamps in would be fun, since I needed to add the Barrymores (Scott #2012; Lionel plays Mr. Potter) anyway.

A film like Life invites one to examine the impact you’ve had on others’ lives—inadvertent or otherwise. How your actions cause ripples in the pond, ones that reverberate beyond your own awareness. George never made a name for himself outside of his town, never conquered the world. But his decency was profound, and so was his impact. He sometimes may feel trapped in his life, but he still has choices. He never embezzles money from the Building and Loan. He never cheats on Mary. He lives on his word, his integrity, and the community responds in kind when he needs them.

George could easily appear a plaster saint, a glib archetype of the Everyman Stewart is often best remembered for. But there are far worse things in this world than to be staid and boring and decent. Sometimes, the ripples you set off aren’t ripples, but waves that capsize the boats of others—not just in an alternate life, but in a real world nightmare of your own creation. To have a legacy where you know you’ve made someone’s life worse, not better—it’s a heavy, heavy thing.

Clarence tells George “No man is a failure who has friends.” I wish that were true. But like Zuzu’s petals, I have a buckeye in my pocket—one I’ve kept there for 15 years, reminding me often of those who mattered, but more recently of those I’ve damaged. Perhaps irreparably. For it was a wonderful life. But I’m no George Bailey. And while the future remains uncertain, it will be quite a while before those waves stop crashing.
Posted by The Filmatelist at 5:08 AM No comments: