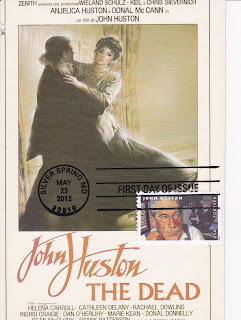 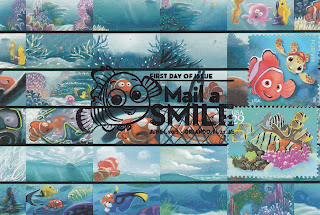 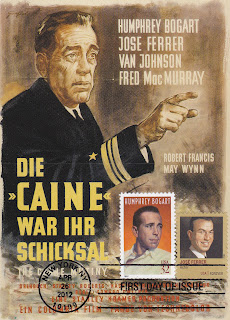 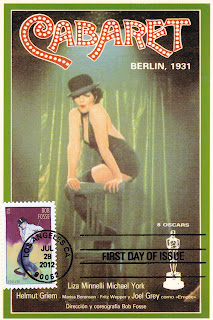 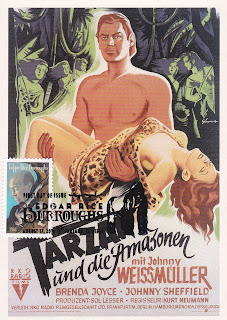 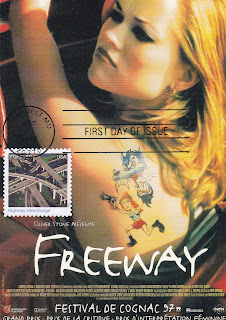 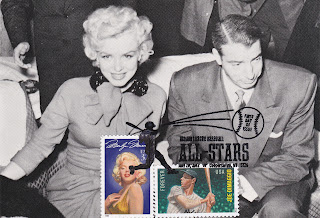 Baseball All-Stars issue, including Joe Dimaggio, Scott # 4697, here with Marilyn Monroe, # 2967
Posted by The Filmatelist at 6:12 PM No comments: 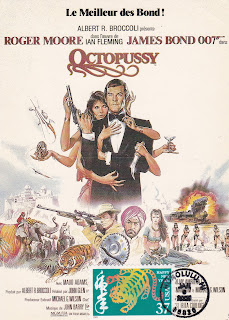 I really, really wish I liked James Bond movies.  With each one, I go in with high hopes and disbelief gladly suspended.  And each time, I usually come out with something to latch onto that I can say I liked or enjoyed.  But time and time again, a larger disappointment looms because they just come across as a little…desperate.  Too eager to please, to impress, to titillate (chastely), to push the envelope but never really get out of our comfort zones.

They certainly show up on TV enough that I give them a second chance, but quickly get bored or frustrated by the effort.  Maybe because long before Bond and Bond, I knew Roger Moore and Pierce Brosnan as The Saint and Remington Steele—the former still self-amused but less long in the tooth, the latter a suave and charming movie addict surrounded by mystery and not epic stupidity.  And as great as he is, most of the Connery films have fared quite badly over the years; even “classics” like Goldfinger only serve to remind you that more often than not, his Bond was actually a pretty incompetent spy.

And now we have Skyfall.  The raves were inescapable, and Daniel Craig was a more rough-and-tumble incarnation, which I preferred (I consumed the Ian Fleming novels in my youth), so I had my hopes up.  Certainly, Casino Royale was above average and had some terrific setpieces, but still took too long to get to the point.  Quantum of Solace made little sense from start to end.  And while there’s a lot to like in Skyfall—its believable stuntwork, its sense of franchise continuity, its earnestness in burrowing into Bond’s psyche—for me, like most Bonds, the whole is less than the sum of its parts.

There’s only one Bond film I really, really like: From Russia with Love (Young, 1963).  Maybe it’s because its villains are scary without being cartoonish (by comparison, Javier Bardem’s baddie practically plagiarizes Batman’s Joker’s rictus grin).  Maybe it’s because the stakes (a Cold War decoding machine) are proportionate to the proceedings; once world domination because the redundant goal in these films, everything had to be bigger, but rarely better.  In Russia, there are no crazy gadgets, and some Turkish flavor but little gratuitous globe-hopping.  Plus, there is a genuinely gorgeous woman (Daniela Bianchi) who doesn’t strain credulity by doubling as a brilliant scientist and sexual pushover.  The film as a whole is lean, gritty, exciting, but never overplays its hand.

For someone allegedly good at cards, Bond usually overplays his hand.  And Skyfall almost does, too. For as ably executed and well-cast as it is, there is only one thing genuinely special about it, but it’s a doozy.  Roger Deakins is the cinematographer this time and his contribution is nothing short of miraculous—perhaps the best below-the-line asset any Bond film has had since John Barry’s Russia score and Shirley Bassey’s brassy pipes (though Adele holds her own here, too).

The Bond films have always indulged in location photography, but it always played as mere travelogue porn (including my own Bay Area home here in San Francisco), settling for getting landmarks in frame and exploiting local “exoticism”.  But Deakins captures the exquisite details of lights, reflections, colors, and compositions.  Bond has always been about sex (literally or metaphorically), but this film brings something new to the series—visual sensuality.  It is glorious to gaze upon and elevates the film to something far more promising.  That the content (from story motivation to final resolution) doesn’t quite deliver the goods isn’t Deakins’s fault.  His work is masterful, and makes this Bond one that stands out.

After wonderfully reliable work for Scorsese, Sayles, Mendes, and the Coens (among others), there’s something perversely irresistible at the thought he might win a long overdue Oscar for a Bond film.  But I hope he does.  For truly, nobody does it better.

The Chinese Year of the Tiger stamp is Scott #3895c.

Posted by The Filmatelist at 10:07 AM No comments: