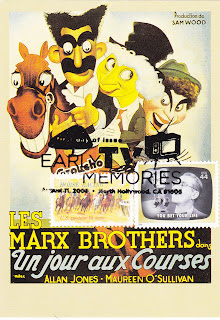 The immense outpouring of affection recently at the loss of Maurice Sendak filled me with joy and sadness—joy at the abiding legacy he left with so many people, and sadness because I was not one of them.  I never grew up with Where the Wild Things Are, or any of his other books.  I was probably in high school before I was even aware of who he was, and while that wasn’t too old to appreciate his genius, the opportunity his books had to tap into my childhood impulses of defiance, giving tacit approval to less decorous desires, was past.

Mine was a childhood of “Children should be seen and not heard”, of bedtime Bible stories and Little Golden Books.  Maurice Sendak, Judy Blume, were simply not on my radar at all.  The only element of subversive role modeling in my life, embracing anarchy and reveling in chaos, were the Marx Brothers.

To my parents, they were silly.  Cartoonish.  With cute musical numbers.  In short—harmless.

But while other classic comedians I was allowed to watch might fall into that characterization—Bob Hope or Danny Kaye, say—I knew the Marxes were different.  For they weren’t cowards.  They weren’t clowns.  They were jesters, fearless in the face of authority.  They were brazen with women, insulting toward tough guys, and irreverent towards anyone who told them what to do.  They were one-of-a-kind and hilarious.

And I loved them.  For they were a balm in a landscape of suburban propriety I had around me.  And the fact that my parents didn’t seem to get it—the satire, the innuendo (much of which went over my head, too), the blatant disrespect they represented—made them that much richer to me.  In a still water world, they were my din and tonic.

A Day at the Races (Wood, 1937) may be their last largely satisfying movie.  Once they moved to MGM, they began to gradually lose their fizz, but this was only their second film at the studio and their energy was still suitably manic and unrestrained, though some telltale warning signs (overly produced musical numbers, an increased sentimentality) are there, too.

While the Marxes would usually run rampant in the corridors of the elite (opera circles, ivory tower universities, luxury cruise liners), Races is unusual in that it straddles itself between a highly formal environment (the Shelton sanitarium) and the racetrack, where shysters, con men, and rascals like Groucho, Chico & Harpo are right at home.

The horse in Races is High Hat, the final hope for the financially strapped hospital that has just recently acquired Hugo Z. Hackenbush (Groucho) as its chief-of-staff, at dowager Margaret Dumont’s insistence (though no one knows he’s actually a horse doctor).  That the racetrack adjoins the sanitarium means the action can move back and forth, with jockey Harpo and co-conspirator Chico prepping the horse for the big race.  The less said about Allan Jones, colorless love interest to sanitarium owner Maureen O’Sullivan, the better.

There are some memorable comedic setpieces. The legendary Tootsie-Frootsie ice cream negotiation between Chico & Groucho is still fantastic, and Chico & Harpo’s game of charades is fun, as are the boys’ examination of Dumont & foiled seduction of floozy Esther Muir.  And the climactic race is in the boisterous spirit of the football game in Horse Feathers, which takes a lot of the conventions of the sport and turns them on their head (and unlike most horse racing films, this is a steeplechase, which is fundamental in a final twist).

But the film really belongs to Groucho.  His phone conversation with Leonard Ceeley is a miniature masterpiece, and his rumba number alternating between Dumont & Muir has its own perverse grace.  None of the other Marx boys could hold the screen on their own, for Chico perpetually needs a partner and Harpo risks becoming too precious left to his devices alone.  But give Groucho a dance floor or an empty hotel room and he’s master of the house.

And speaking of dance numbers, Races is unique in Marx Brothers history as being the only one of their films nominated for an Oscar—Best Dance Direction for the genuinely bizarre “All God’s Children Got Rhythm”, which manages to combine terrific jitterbugging with unfortunate blackface in a bizarre tangent that has nothing to do with anything in the story (though the number is still a step up from another turgid Jones ballad).

The Marxes did end up getting an Oscar—an Honorary Achievement one in the early 1970s, when only Groucho was left alive.  One can only imagine the chaos they would’ve caused at a ceremony, worthy of Races’ gala or the climax of A Night at the Opera (still my favorite of their flicks).  But they had to become elder statesmen of comedy to finally get their due.

Which still, curiously, has not happened with the USPS yet.  For while Laurel & Hardy, Abbott & Costello, and W.C. Fields have gotten their stamp, the only mention they’ve gotten has been Groucho in the You Bet Your Life stamp (seen here as part of the Early TV Memories series, Scott #4414; coupled with horse racing, Scott #1528).  But their real impact as a group, making them still quite contemporary while the other artists I listed have dated some over the years, continues to go unrecognized.  Having a slate of stamps, with the mirror scene from Duck Soup, the stateroom scene from Opera, and the barrels in Monkey Business (to throw Zeppo a bone) would be perfect. And throw Tootsie-Frootsie in there, too.  For the Coconut in all of us.

For more entries in the Classic Movie Horse Blogathon
Posted by The Filmatelist at 10:00 AM 8 comments: