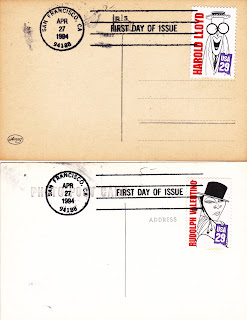 You already know about my first encounter with the USPS and first-day-of-issue postmarks.  But the cover I scanned in that post was one I bought onsite.  However, on that day, I also brought some classic film star postcards myself to get my own postmarks—the first time I’d ever tried this. 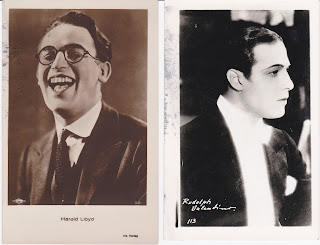 Note all the black ink smudges on the left side of each card.  As you can see, this was not such a great idea.

That day, the postal employees with the cancellation stamp were in the lobby of San Francisco’s magnificent Castro theater, and as I gave them the postcards, they stamped each one individually.  However, the ink on the cancellations didn’t have a chance to dry before they handed the cards back to me in a stack, ready to move on to to the next customer.  As a result, ink from the back of one postcard (where the postage stamp was) ended up partially defacing the front of another postcard (with the image) in the stack.  If I had known better, I would’ve put the postage stamp on the front, with the image, so even though the cancellation might still get a little smudged, it would only end up marking up the back of the next postcard, which nobody would see.

I don’t know how the Postmaster stations handle it now, with the large volumes of covers and cards they must receive for each new issue, but I’ve never had a problem with the cards smudging merely from touching each other (and believe me, on some issues, I’ve given them an enormous amount of cards to stamp).  Sometimes, I imagine some sad little postal worker at a small table in a windowless room, holding a cancellation stamp, inking it, and then pressing down on one mass-produced envelope after another.  And another.  And another.  I know my postcards are unique in this respect, since they’re created by hand, different from anything else this employee would encounter.  Do they represent a welcome change of pace to this lonely worker?  Do they enjoy my attempts at creativity in assembling the cards?  Or is it just another part of the job they look forward to putting behind them?
Yes, I actually wonder about these things.