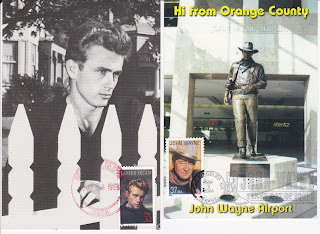 Unlike the last installment on bad postmarks, sometimes they aren’t anyone’s fault, but just a byproduct of the materials you’re working with.  Above are two postmarks that went very bad, for obvious reasons.


Long before I began my First-Day-of-Issue efforts, I had hundreds upon hundreds of postcards of movie posters and one-sheets.  These were typically on regular card stock.  However, once I started adding additional cards, buying them specifically in anticipation of certain stamps scheduled to come out, I started to run into this problem:

These postcards were picked up at tourist locations rather than stationary stores or postcard shops, so they have glossier finishes, making the postmark stamp unworkable.  This isn’t true of all such postcards, though, and some that appear to have a glossy finish work just fine, so it’s always a calculated risk.

Sometimes, I solve the problem by doing this: 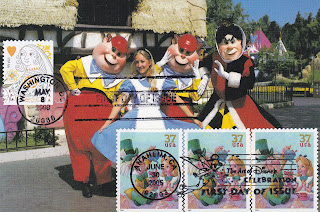 However, this can get a bit pricey so I don’t resort to it too often—only when I think a postcard’s finish might otherwise get me into trouble.
Posted by The Filmatelist at 6:40 PM No comments: