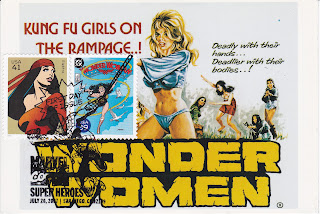 Though my job has nothing to do with postage stamps, it has everything to do with movies, so I thought it couldn't hurt to put in a quick shout out to my (relatively) new employer, the Mill Valley Film Festival, which runs from October 4-14 this year. It also seems unlikely that my collection will converge with our annual festival fare too often, but this year yielded a couple of offerings I couldn't ignore.

The first is the new documentary Wonder Women!, written and directed by Kristy Guevara-Flanagan and showing at our venues both in San Rafael and Mill Valley. Of course, this is a different film than the truly kick-ass 1973 Robert Vincent O'Neill one-sheet depicted, but the films (and stamps) dovetail nicely since this festival film is a self-described "Untold Story of American Superheroines" and mines the history of the DC Amazon princess and her pop culture legacy through print, film and TV that still resonates today. 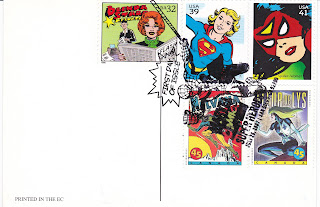 Coincidentally, when these comic book stamps came out in 2007, I decided to use this postcard to feature all the women from the comics on postage stamps that I was aware of.  So featured here are Wonder Woman, Supergirl, Spider-Woman, and Elektra (Scott #'s 4084m, 4084i, 4159g & 4159i).

Also depicted is Brenda Starr from the USPS comic strip stamp series (Scott #3000t), plus two stamps from Canada of the comic book heroines Nelvana and Fleur de Lys (like the Brenda Starr stamp, issued in 1995)

Another film we're featuring is a 35th Anniversary screening of Star Wars, which originated from the mind of George Lucas, a Marin county resident (in fact, Skywalker Ranch isn't far from our offices here at the California Film Institute). For those who haven't had the pleasure of seeing it on a big screen in a while (or perhaps ever), it's bound to be an event to remember. 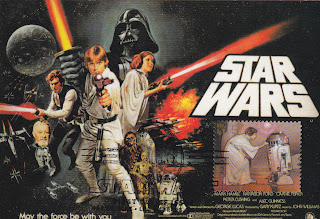 I'll be doing film introductions and Q&A's every day throughout the festival, so who knows?  Maybe our paths will cross at the MVFF (it's our 35th anniversary, too).  Hope to see you there!
Posted by The Filmatelist at 12:17 PM