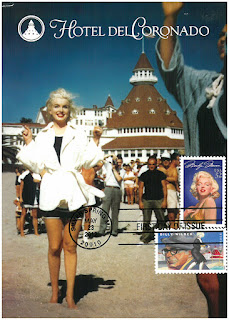 Billy Wilder's hilarious Some Like It Hot (1959) has the following exchange between Jerry (Jack Lemmon) and Joe (Tony Curtis), after Jerry spent the night, in drag disguise, dancing with millionaire Osgood (Joe E. Brown).

Jerry: Have I got things to tell you!
Joe: What happened?
Jerry: I'm engaged.
Joe: Congratulations. Who's the lucky girl?
Jerry: I am.

I've seen this film on the big screen more times than I can count, and the one thing unusual about this exchange is that the audience reaction is so strong after "I'm engaged" that I've never once heard the next, to my mind funnier, joke clearly. It gets lost in the gales of laughter. 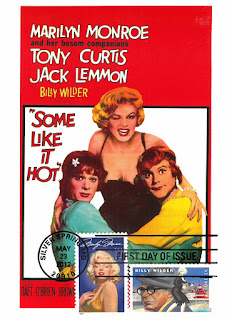 But given the breakneck speed of the film, it's easy to see why.  Few comedies I know are so dense with jokes as this one.  There are the recurring jokes (the one-legged jockey, Blood Type O), the meta-movie ones (the gangster film references, the Cary Grant impersonation, 30s matinee idols George Raft and Pat O'Brien in the cast), and the countless sexual innuendos.  All funny, all impeccably delivered.  But so many of the jokes also contribute to the actual plot, like a perfectly-oiled machine of cause and effect that make the story details of two musicians on the lam from the mob both highly unlikely and hilariously inevitable.

I've always loved Hot because it has edge and bite, but isn't an acid bath of cynicism like so much of Wilder's (admittedly terrific) work.  And it's a marvelous study of contrasts: male vs. female, Chicago winter and Miami warmth, a playful musical comedy with the highest body count of any Wilder film.  Finding the right tone for all these contradictions can be a high-wire act, but Billy balances them effortlessly.  And ultimately, it's a film about acceptance, embracing how fluid and foolish the human experience can be but still showing a generosity toward all its manic characters.

The Hotel del Coronado is featured heavily in the film, particularly when Sugar (Marilyn Monroe) in her bathing suit first meets Joe in his faux millionaire get-up on the beach behind the hotel.  Growing up in San Diego, the Hotel del was a constant fixture in the visual language of the city, as close to an icon as that suburban kingdom had. Coronado is actually an island off the coast, and the Coronado Bridge has this magnificent sweep, arcing its way along the city skyline. As a family, we didn't go there often (we were ensconced in the North County, near Escondido, the avocado capital) but any trip there represented a special occasion. The beach was beautiful, and never a hot mess of tourism like so many of the San Diego beaches were.

I grew up in the era of the TV show Simon & Simon, so I was used to seeing San Diego landmarks on screen, but Some Like It Hot, a film that never travels farther west than Chicago, was the first time I'd seen it in a movie, and even then, there was this geographic displacement. For there were Sweet Sue's Syncopators cavorting in the Florida surf, with the Hotel del behind them.  But it still created a connection for me, first rooting the glamour of Hollywood in something real and recognizable. 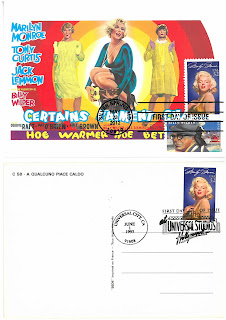 Some Like It Hot was also one of my ex-wife's favorite movies, and one that she'd never seen before meeting me. I remember going with her to see it in the theater and having that line so buried in laughter, she didn't even remember hearing it. So we returned home and I played the VHS for her so she could. I usually had a good sense of the kind of movie she'd like, and many of her subsequent favorites were ones I'd seen on my own the first time (as I often did while she worked late) and knew she would love: Eternal Sunshine of the Spotless Mind. The Wild Parrots of Telegraph Hill.  O Brother, Where Are Thou?

When we went back to visit San Diego, I took her to the Hotel del. It's a beautiful complex, and its modern amenities didn't detract from its classic Victorian grandeur (it was built in 1888). All the fixtures and details were gorgeous, and we even had Easter brunch there--as impressive and as indulgent a spread as I've ever seen. They have photos and ephemera from the film on display in the lobby, and the sand between your toes probably felt just like it did when Jack and Tony and Marilyn walked there 40+ years earlier. 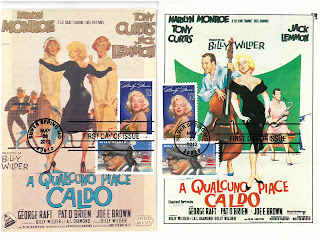 That was long ago, and feels even longer. And so I wonder what those films I introduced her to and she loved so much mean to her now. As the film reminds us, nobody's perfect. But at least she tried to make things work. And in the end, she was the one who got the fuzzy end of the lollipop.  So I know there's plenty that she'll choose not to look back on, and I can't blame her.  Like that drowned out joke, the swell of emotion and memory can easily overwhelm many of the smaller details, no matter how good or rich or authentic they may have once been.

For some people, movies, songs, and places are inextricably tied to a person or an experience. Therein lies their special beauty and their power. Some films can be timeless, but not everyone separates that larger appreciation with the more personal resonance they have. For some, those emotional associations are too strong, and the value they once had are no longer worth the poignancy they now bring.  And so it was with her, sometimes.  But I can't say.  We may not have been right for each other, but I hate the idea that Some Like It Hot might be as much out of her life as I am. I hope not. 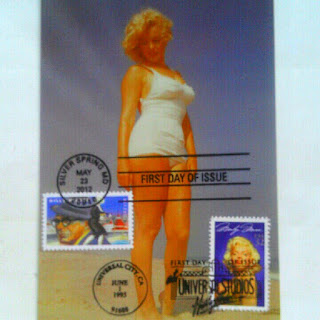 The Marilyn Monroe stamp (Scott #2967) was the first in the Legends of Hollywood USPS series.  The Frank Capra stamp (Scott #4670) features in its illustration the Hotel del (which was also used to terrific effect 2 decades later in Richard Rush's excellent The Stunt Man).

Posted by The Filmatelist at 11:31 AM

A very poignant post and a lovely tribute to this movie. Memories like a movie shared between two people can be bittersweet, and you've described that feeling perfectly.

Thank you for joining the Beach Party blogathon with this thoughtful post.

"Some Like It Hot" may be the best of the best of Billy Wilder and you certainly do not miss any of the reasons why.

I also grew up in San Diego's north county (born in Escondido), though in an earlier decade. I'm wondering if you are familiar with the TV series "Harry O." It aired for just a few seasons in the '70s and starred David Janssen as a retired San Diego cop, now a private eye. Initially the series was set in San Diego with Harry living on Coronado Island. Later, the setting was moved to LA (boo!).

Really enjoyed your insightful take on "Some Like It Hot" as well as your personal reflections - and selection of favorite films of '59 (many are also favorites of mine, plus Our Man in Havana and Room at the Top).

What an interesting post! It made want to spend my next vacation at the Coronado Hotel!
And it was very nice of you to say how much Some Like it Hot meant personally. And you were totally sincere in this post!
Don't forget to read my contribution to the blogathon! :)
Cheers!
Le
http://criticaretro.blogspot.com.br/2015/06/mulher-de-verdade-palm-beach-story-1942.html

Really love the personal connection you share with this film. Thanks for sharing.