Later this month, Sight & Sound releases their international poll of the Greatest Films of All Time, probably the most anticipated of such lists since they've been conducting it every 10 years since 1952.

Like most film lovers, I tend to treat any such list with curiosity and skepticism, taking issue with some choices, other omissions, and seeing how the canon has (or hasn't) shifted over time.  For the last 5 polls (or half-a-century), Citizen Kane has been at the top of the S&S polling, though I'm suspecting that this is the year it will be unseated.

By what?  A few candidates are possible, including two that would be on my own list, and which I've discussed in this blog already: Vertigo (Hitchcock, 1958) and 2001: A Space Odyssey (Kubrick, 1968)

For me, however, I never presume to be an arbiter of "Best"; I simply go with the films I would miss the most.  A Desert Island tally, one that inevitably would have some painful absences but the balance I know I'd need if I could only rely on 10 films to get me through the rest of my life.

So, the other eight?  Top of the list would be The General (Keaton/Bruckman, 1926), quite possibly my favorite film ever, Buster Keaton's meticulously constructed Civil War epic that combines his exquisite comic timing with sweep, spectacle, some curious romance, and glorious visual compositions.  It has a little bit of everything, and while some of his other films may be just as funny (Sherlock Jr., Steamboat Bill Jr.,), I would unquestionably miss this one the most. 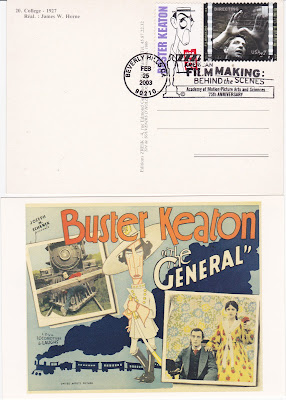 For sound comedies, The Marx Brothers and Some Like It Hot would be serious contenders, but the emotional themes that run through Preston Sturges' divine and hilarious The Lady Eve (Sturges, 1941) make it the one I'd want in close company.  It also has perhaps the sexiest seduction scene ever, and Barbara Stanwyck may be my favorite actress, too.

When it comes to my favorite Italian and Japanese directors, I'd probably say Antonioni and Ozu, and films like L'Eclisse and An Autumn Afternoon are undeniable masterpieces among a body of incredible work.  But in truth, I would probably have greater regret if I didn't include the emotional roller-coaster and spirited energy of La Dolce Vita (Fellini, 1960) and The Seven Samurai (Kurosawa, 1954) in my sandy oasis. Marcello Mastroianni's first scene and Toshiro Mifune's last remain unforgettable. 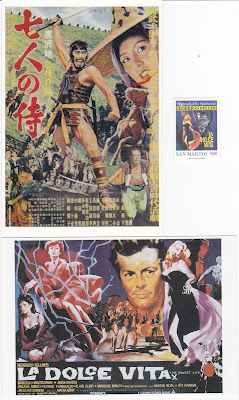 Both Black Narcissus (Powell/Pressburger, 1947) and Cleo from 5 to 7 (Varda, 1962) ostensibly deal with women at a crossroads of personal crisis and commitment, but while the former takes an operatic approach to the cultural and sexual discord among a group of nuns in the Himalayas, the latter is like a soulful jazz standard, full of bright Parisian energy and experimental riffs, but grounded in a need for love and connection in the shadow of our mortality.

I suppose I should choose one film made in my own lifetime, so I'll pick The Spirit of the Beehive (Erice, 1973), a beautiful, tranquil, tremendously poignant meditation on family, politics, and the power of the movies, as the imagery of the original Frankenstein informs the way a small Spanish girl sees the world around her. 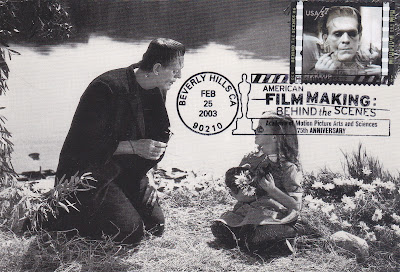 That's 9.  So what gap do I fill?  A western?  A french film?  Hawks or Rohmer, perhaps?  But what I notice I'm missing the most is Jazz.  And so I pick Norman McLaren's miraculous Begone Dull Care (McLaren, 1949), maybe the 10 most perfectly abstract and delightful minutes ever committed to film.  McLaren's animation style was to paint and scratch the film stock and emulsion itself--essentially, a camera-less process.  With lines and patterns dancing to Oscar Peterson's wonderful music, it is a feast for the eyes and ears.  When I die, it's the film I'd want to have played at my wake.  Enjoy.


Buster Keaton was part of the Stars of the Silent Screen, Scott # 2828.  In the American Filmmaking series, the stamps for Directing and MakeUp are # 3772b and -e, respectively.  The San Marino stamp for La Dolce Vita was released in 1988 and for The General, in 1995.