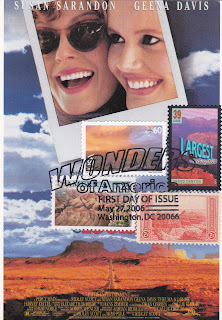 It’s hard to believe that Thelma & Louise was released 20 years ago. I was in college at the time and remember all the controversy about feminist outrage and confronting misogyny (both overt and latent). I haven’t seen it again since—it’s not the type of film that gets replayed on TNT the way other “chicks with guns” films like Aliens and Terminator 2 are. But I remember that even back then, the Grand Canyon jump was a cheap and inauthentic end to two beautifully realized characters, with the final freeze frame of the car in the air a royal cop-out to an otherwise engaging movie.

What I liked about the film most, though (besides some terrific performances across the board) was that it was the only film that gave Ridley Scott visual breathing room. From Alien to Blade Runner to Black Rain, his films were suffused with imagery that was wet and dark and claustrophobic. But this film showed that he can handle sunshine and wide open spaces, that he had a directorial gift for American landscape as a complement to his heroines’ road trip. Sadly, even though subsequent efforts like Blackhawk Down and Gladiator take place largely outdoors, the style is still visually cluttered and oppressive. Thelma is a window into a career that might have been—a spare, linear, natural sensibility that allows for the fact that empty space need not be devoid of ideas.

I love to go camping and have been to the Grand Canyon, but never both together (nor have I explored farther than the south rim). Hopefully one day. The Grand Canyon stamp (Scott #4054) from the Wonders of America series gave me an opportunity to pull some older Grand Canyon stamps as well, the oldest of which is from 1934 (Scott #741) as part of a National Parks series. The other two are Scott #2512 & C135 (which designates an Air Mail stamp).
Posted by The Filmatelist at 6:59 PM