The Heart of Our World 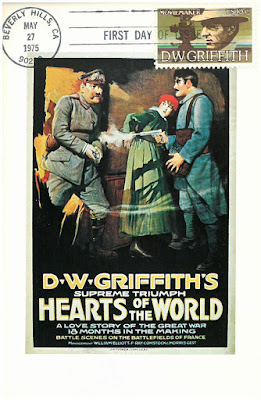 I mentioned in a previous post that I rarely find postcards at stamp conventions or philatelic dealers like the ones I create: film posters with a stamp and First Day of Issue postmark that has a related subject or theme.  But this card holds as an unusual exception is the oldest variation of that type in my entire collection.

I haven't seen this Griffith film from 1918, though it has some of his regular players, including Lillian Gish and her sister Dorothy, Adolph Lestina, Robert Harron, Kate Bruce and even Erich von Stroheim (they made 10 films together).   He is the first film director to get a US postage stamp (if you don't count Walt Disney, who was far better known as producer and entertainment mogul) and justly seen as the grandfather of American cinema, with The Birth of a Nation (1915) one of the most influential and infamous movies ever made.

But now, his legacy is split into two branches that intertwine like a caduceus--that of artist and propagandist, capable of sweeping narratives and delicate emotions that reveal universal truths in the human condition, but sometimes at the service of the most hateful (and sadly effective) historical revisionism and worldviews.  Some of his films are relatively neutral politically, and often reveal him to be an epic sentimentalist as well as an expert storyteller.  But he is also the antecedent of the Soviet revolution propaganda movies--which were far more sophisticated in technique--and of the films of Leni Riefenstahl, which were far more insidious in their agenda.

I am named after my father, who in turn was named after his grandfather Sterling Smith, a private in the 26th regiment, 3rd East Tennessee Volunteer Infantry in the Confederate army.  We are fairly young as a nation, but still rich with memory.  Our history informs each of us, but what we choose to do with our lives and our sense of purpose or expression is up to us alone.  So Griffith inspired many, persuaded many, and his creative gifts are still with us to bear witness to, as is the terrible shadow that looms over that body of work. 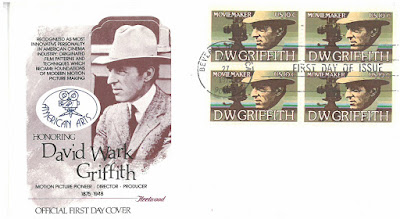 The Griffith stamp is Scott #1555 and was released on the 100th anniversary of his birth in 1875.  Although I don't do it for contemporary issues, for cinema-related stamps released before I started the hobby, I usually do collect a cache like the one pictured.
Posted by The Filmatelist at 3:34 PM